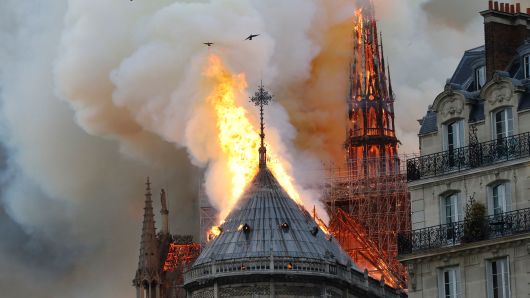 President Donald Trump on Monday encouraged France to use “flying water tankers” to put out a raging fire at the Notre Dame Cathedral in Paris as firefighters rushed to save one of the country’s most visited landmarks and local officials called for those nearby to evacuate the scene.

“So horrible to watch the massive fire at Notre Dame Cathedral in Paris,” the president wrote. “Perhaps flying water tankers could be used to put it out. Must act quickly!”

Francois Guillot | AFP | Getty Images
Smoke and flames rise during a fire at the landmark Notre-Dame Cathedral in central Paris on April 15, 2019, potentially involving renovation works being carried out at the site, the fire service said.

Hundreds of firefighters responded to the enormous blaze, and a French firefighter official reportedly said late Monday that the structure of Notre Dame could be saved from total destruction.

They did not use aircraft to dump water on the building, a strategy that France’s civil defense agency appeared to dismiss earlier in a pair of tweets.

“The drop of water by air on this type of building could indeed result in the collapse of the entire structure,” the agency wrote in French. “Alongside those … who are currently doing the maximum to save #NotreDame.”

“Helicopter or airplane, the weight of the water and the intensity of the drop at low altitude could indeed weaken the structure of Notre-Dame and result in collateral damage to the buildings in the vicinity,” the agency added.

The agency said later in an English-language tweet that “all means are being used” to bring the fire under control — “except for water-bombing aircrafts which, if used, could lead to the collapse of the entire structure of the cathedral.”

It was not immediately clear what caused the fire at the 12th century building that attracts more than 13 million visitors each year and is home to a number of the country’s artistic masterpieces. The cathedral was being renovated at the time it caught fire. Parts of the church’s historic spire are reported to have collapsed.

Experts said that the president’s suggestion would likely make the situation more dangerous.

“If you hit that with tons of water from above, that’s going to collapse the entire structure and make the situation worse,” said Wayne McPartland, a retired New York City Fire Department battalion chief. “If you miss, you might hit civilians in the street.”

France made plans to convert six aircraft into air tankers last year, according to the industry website Fire Aviation. Each of the planes can carry 2,600 gallons of water.

By Monday evening local time, France’s Ministry of the Interior reported that 400 firefighters were responding to the Notre Dame fire.

At a tax roundtable event later Monday in Minnesota, the president said that the cathedral was “burning at a level that you rarely see a fire burn.”

“It might be greater than almost any museum in the world, and it’s burning very badly. It looks like it’s burning to the ground. So, that puts a damper on what we are about to say, to be honest,” Trump said.

The president said that French authorities believed the cause of the fire was the renovation that was underway.

“I hope that’s the reason. Renovation, what’s that all about? But it’s a terrible sight to behold,” Trump said.

France’s junior interior minister said later Monday that the cause of the fire was not yet known.