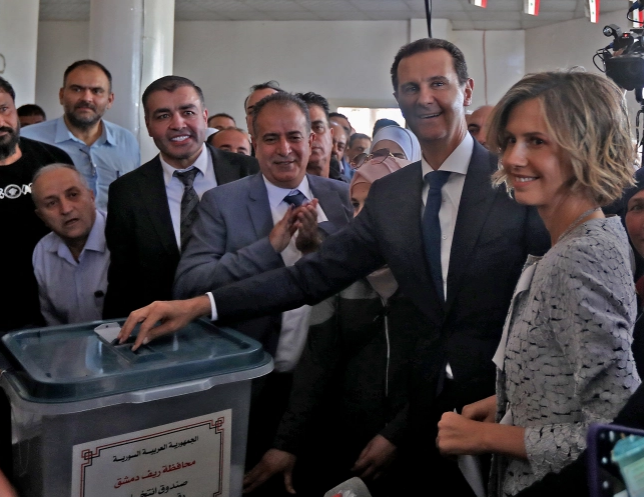 Posted By: Editorial Teamon: May 26, 2021In: ElectionsNo Comments
Print Email

Voters in government-held parts of Syria are heading to the polls to cast ballots in an election that is set to cement a fourth term for Bashar al-Assad – but is dismissed by the opposition and Western powers as a farce.

Wednesday’s presidential vote is the second since the beginning of Syria’s uprising-turned-war a decade ago, a conflict that has killed hundreds of thousands of people and forced millions to leave the country. In 2014, al-Assad won nearly 89 percent of the vote.

Al-Assad cast his ballot in Douma near the capital, Damascus, a previous rebel stronghold and the site of a suspected chemical weapons attack by government forces in 2018.

Banners of al-Assad were hung on the 12,000 polling stations across the country, while crowds of people sang and danced outside. State and pro-government media portrayed the elections as one of unity across sectarian, ethnic, and ideological lines.

State news agency SANA said the polls will open for five more hours until midnight due to high turnout.

Damascus-based student Layla* said polling stations were packed with voters all morning and that many students were being forced to cast ballots. “Some universities will fail or even expel you if you don’t vote,” she told Al Jazeera.

“But it doesn’t matter; we all know what the results will be because these elections are just a show,” she said, adding that none of the three candidates represented her.

Al-Assad, whose “Hope Through Work” electoral campaign heavily focused on creating jobs, is certain to secure another seven-year term despite 10 years of war, poverty and an economy in freefall. Nadine*, a Damascus resident who decided not to vote, said people in the country have been more outspoken in conversations about the economic crisis.

“People are complaining about the poverty and inflation,” she told Al Jazeera. “But the opposition is far more hated than the regime.”

Danny Makki, Middle East Institute nonresident scholar, says the economic crisis has led to “peak discontent” even among the most biggest supporters of the government.

“Although the elections have been celebratory, to say the least, [the] post-election [period] is where the true challenge awaits,” he told Al Jazeera. “Just how much can al-Assad keep the economy afloat and manage Syria’s problems, even with Russian and Iranians help its a hard ask,” he added, noting the president eyed consolidating power in parts of Syria that were captured from rebel groups in recent years.

Al-Assad allies Iran and Russia, as well as Belarus, sent delegations to monitor the election.

The Syrian government’s Higher Judicial Committee for Presidential Elections said there have been no electoral violations thus far across the country.

Meanwhile, the foreign ministers of the United States, United Kingdom, France, Germany and Italy issued a joint statement in which they described the polls as a sham. “For an election to be credible, all Syrians should be allowed to participate, including internally displaced Syrians, refugees, and members of the diaspora, in a safe and neutral environment,” the statement said.

Speaking to the media after casting his ballot in Douma, al-Assad rejected the criticism.

“As a state, we do not care at all about such statements,” he said. “But more important than what the government says or does not say is what the people say. I think that’s what we have seen during the past few weeks. It’s a clear answer to all of those people and it tells them that the value of your opinions is zero.”

At the onset of the electoral registration last month, US and French officials told Al Jazeera the election would neither free nor fair without a political solution in the long-running war.

The Syrian Democratic Council (SDC), which controls northeastern Syria, slammed al-Assad’s government for obstructing negotiations and meetings. “We will not be part of the presidential election process and we will not participate in it,” it said in a statement.

Like Western states, the SDC called for the full implementation of UN Security Council resolution 2254, which was passed unanimously in late 2015 and calls for an end to hostilities and a political solution to the Syrian conflict.

Pro-government pan-Arab television channel Al-Mayadeen accused the SDC of obstructing voters from accessing polls in Hasakah in the northeast, and being swayed by outside agendas.

The resolution is meant to pave the way for internationally monitored elections following amendments to the constitution.

We know all the correct procedures and rules governing services in Vanuatu.  Now we can impart that knowledge to you.  We are Trade Board Limited and we can help.  See our website at https://tradeboard.biz.