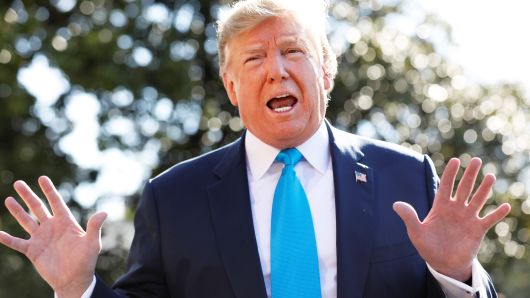 President Donald Trump on Friday insisted that his administration is still actively considering a plan to release detained immigrants into so-called “sanctuary cities,” a strategy which was rejected twice in the past year by the Department of Homeland Security.
The announcement, which came via Twitter, and which the president later doubled-down on, followed an initial report late Thursday about the plan by The Washington Post.
“Due to the fact that Democrats are unwilling to change our very dangerous immigration laws, we are indeed, as reported, giving strong considerations to placing Illegal Immigrants in Sanctuary Cities only,” the president wrote in a post on Twitter.

Trump: We’ll bring ‘illegals’ to sanctuary city areas
3:12 PM ET Fri, 12 April 2019 | 03:59
“….The Radical Left always seems to have an Open Borders, Open Arms policy – so this should make them very happy!” the president wrote in a second tweet.
Trump’s announcement is a near-total reversal by the president of the official position his White House has taken so far.
In a statement Thursday to reporters, a Homeland Security Department spokesman said the plan “was a suggestion that was floated and rejected, which ended any further discussion.”

A former DHS official, discussing the White House’s thinking, told NBC News that the plan was dropped when it was deemed “so illegal.”
In a statement following the president’s tweet, a White House spokesperson chided Democrats for opposing the plan and said they “should be working with the Administration.”
“Democrats say we must have open borders and that illegal immigrants have a right to be in this country at all costs, so they should be working with the Administration to find the best ways to transport those illegal aliens that are already set for release, into communities in their states and districts,” the spokesman, Hogan Gidley, said.
Later Friday, during an event related to 5G deployment, the president said that “we will bring them to sanctuary city areas and let that particular area take care of it, whether it’s a state, or whatever that might be.”
“We can give them an unlimited supply, and let’s see if they’re so happy,” Trump said.
According to The Washington Post, the plan was geared toward delivering political retribution to Democrats including House Speaker Nancy Pelosi, whose San Francisco district was discussed as a target.
Pelosi on Friday told reporters that the plan was “just another notion that is unworthy of the presidency of the United States and disrespectful, the challenges we face as a country, as a people to address who we are — a nation of immigrants.”

Paul Ratjep | AFP | Getty Images
Volunteers and police help organize a large group of asylum seekers outside a Greyhound Station after they were dropped off by Immigration and Customs Enforcement (ICE) officials earlier in downtown El Paso, Texas late on December 23, 2018.
Trump’s decision to revive the proposal reflects a growing sense of desperation within the administration over the rising number of migrant families arriving at the southern border to seek asylum.
Several of Trump’s attempts to detain and deter the asylum seekers have been struck down by courts in recent weeks. Most recently, a federal judge last week ruled that the Trump administration cannot force asylum seekers to remain on the Mexican side of the border while awaiting an asylum hearing in the United States.
This stark reversal of policy reflects the dearth of ideas within the White House as to how to confront the migration crisis on both a policy level and a political one.
The court decisions, coupled with the failure early this year of Trump’s plan to use a government shutdown to force congressional Democrats to fund his promised border wall, have left the White House with few remaining options to contain the ever-increasing flow of families seeking asylum.
That difficulty could pose a challenge for the president’s reelection bid. As Trump embarks on what is expected to be a tough reelection battle over the coming year, controlling undocumented immigration is a promise that remains at the center of his campaign.