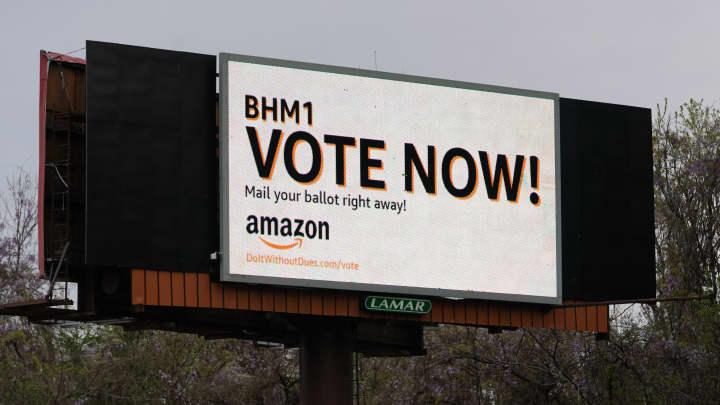 Amazon on Friday secured enough votes to defeat the unionization drive at one of its Alabama warehouses, delivering a blow to organized labor who hoped to unionize a U.S. Amazon facility for the first time.
Of the 3,215 ballots cast, there were 1,798 votes opposing the union and 738 in favor. Approximately 5,800 workers at the Bessemer warehouse were eligible to vote on whether to join the Retail, Wholesale and Department Store Union.
In order to defeat the union, Amazon needed to garner 1,608 votes, or a little more than 50% of the ballots cast. The margin of victory is larger than the approximately 500 challenged ballots, which would have only been tallied if they would’ve swayed the outcome of the election. The election result still needs to be formally certified by the Nationa Labor Relations Board.
The RWDSU said it plans to challenge the election results. The union said it intends to file objections over Amazon’s election conduct with the NLRB, as well as a number of unfair labor practice charges, alleging that “Amazon interfered with the rights of its Bessemer, Alabama employees to vote in a free and fair election.”
The unionization effort in Alabama transformed into a protracted labor battle at Amazon, with the company hiring the same law firm it used to assist with negotiations during a failed union drive in Delaware in 2014. Amazon also made its position on the union campaign clear to workers at the Bessemer facility, by holding mandatory meetings, setting up a website urging workers to “do it without dues” and distributing pamphlets instructing workers to “Vote NO” on the historic election.
The union specifically called out a mailbox that was installed in front of the Bessemer facility, including claims that it was placed there by the U.S. Postal Service at the direction of Amazon. The company said the mailbox was intended to make it more convenient for workers to vote, adding that only the the Postal Service had access to the mailbox.
The RWDSU’s objections are likely to kick off a protracted legal fight surrounding whether Amazon engaged in anti-union conduct that prevented the possibility of a fair election. The RWDSU said it’s prepared to submit evidence to the NLRB in support of complaints that Amazon violated labor laws.
In a statement, RWDSU President Stuart Appelbaum said Amazon “left no stone unturned in its efforts to gaslight its own employees.”
“We won’t let Amazon’s lies, deception and illegal activities go unchallenged, which is why we are formally filing charges against all of the egregious and blatantly illegal actions taken by Amazon during the union vote,” Appelbaum said. “We demand a comprehensive investigation over Amazon’s behavior in corrupting this election.”
Amazon said in a statement that “the union will say that Amazon won this election because we intimidated employees, but that’s not true.”
“Our employees heard far more anti-Amazon messages from the union, policymakers, and media outlets than they heard from us,” the company said. “And Amazon didn’t win — our employees made the choice to vote against joining a union.”
Both the RWDSU and Amazon held news conferences following the result, with employees from the Bessemer warehouse, known as BHM1, in attendance. At the press conference hosted by Amazon, BHM1 warehouse worker Will Stokes said he and others will work with employees who voted for the union to address their grievances.
“We actually have a seat at the table now,” Stokes said. “We’re talking with senior management and over the next 100 days we have things that we want to change. Change will come from this.”
The vote caps off months of intense campaigning by both Amazon and the RWDSU. In November, workers at the Bessemer facility filed notice to hold a union election. RWDSU organizers were stationed outside the Bessemer facility daily, hoping to catch Amazon employees on their way out of work.
Over the ensuing months, support for the campaign mushroomed. The union received a critical endorsement from President Joe Biden, who, without naming Amazon, discouraged any employer interference in the election.
The White House declined to comment on the election outcome until the NLRB certifies the results.
Amazon has long been a target of major labor unions, with the Teamsters, the United Food & Commercial Workers Union and the RWDSU quietly meeting with warehouse and delivery workers. The coronavirus pandemic, the explosion of Black Lives Matter protests last summer and rising concerns around workplace safety fueled further interest in organizing Amazon warehouses.
In a statement, Randy Korgan, director of Amazon for the Teamsters, commended the RWDSU’s efforts to organize Amazon workers in Alabama.
“Despite going up against one of the world’s richest men in a country with weak labor laws, the workers in Bessemer brought national attention to issues that many non-union workers face in this industry,” Korgan said. “This fight is not over.”