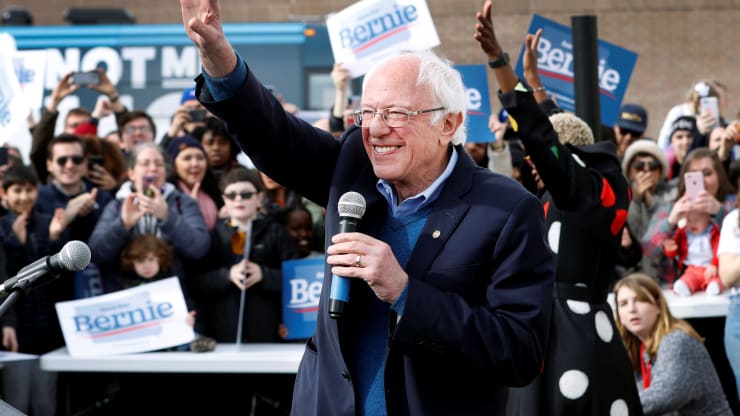 Bernie Sanders’ presidential campaign raked in a whopping $25 million in January alone and will use the haul to bankroll ads and staff across the critical Super Tuesday slate.

The Vermont senator raised more in January than in any other month  in the 2020 Democratic presidential race, his campaign said in announcing the haul Thursday. It added that it received 1.3 million donations from roughly 650,000 people.

The flood of cash came just before the start of 2020 primary nominating contests. Iowa held its first-in-the-nation caucuses Monday, followed by contests this month in New Hampshire, Nevada and South Carolina.

The Sanders campaign said it will put $5.5 million into television and digital ads in 10 states that hold primaries in coming weeks: South Carolina and nine of the 14 states that have contests on delegate-rich Super Tuesday March 3: California, Texas, Arkansas, Colorado, Massachusetts, Minnesota, North Carolina, Tennessee and Utah.

The ads will expand on a previously announced $2.5 million buy in California and Texas — the two biggest Super Tuesday prizes.

The campaign also said it would “immediately increase” staffing in the March 3 primary states.

Sanders has consistently led the 2020 Democratic pack in fundraising, including more than $34 million in the fourth quarter. None of his Democratic competitors topped $25 million raised in the last three months of 2019. Former New York Mayor Mike Bloomberg, who is worth nearly $60 billion, is self-funding his campaign for the Democratic nomination. His campaign spent more than $180 million in over a little more than a month in the fourth quarter after he joined the raise near the end of November.

The Sanders campaign entered 2020 with more than $18 million in the bank, more than any other Democrat seeking donations. President Donald Trump, whom Sanders hopes to challenge in November, started the year with more than $100 million on hand.

Sanders has been vying for the lead in the delayed results from this week’s Iowa caucuses with former South Bend Mayor Pete Buttigieg, according to delayed data from the Iowa Democratic Party. The Vermont senator leads averages of polls of the New Hampshire primary, which is scheduled for Tuesday.

Sanders has an advantage in an average of polls in California and but trails in limited polling of Texas.

Finding some good Ebooks to read won’t take much time at all once you have made the decision to sign up with “TOP platform“ The Online Publishers .