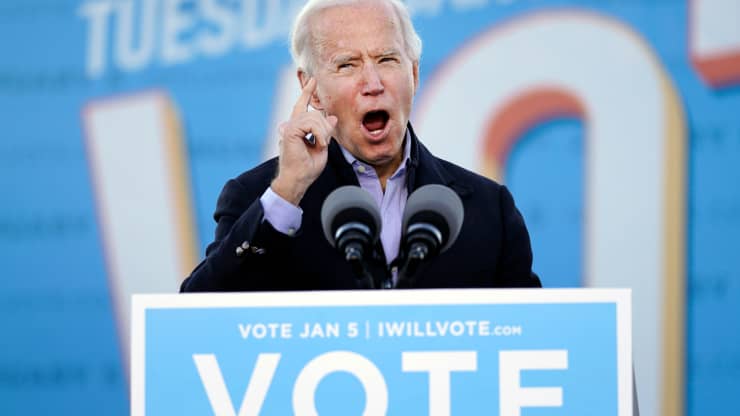 President-elect Joe Biden went to Atlanta a day before the Georgia Senate runoff to do more than boost the two Democrats in Tuesday’s election.

As he stumped for Jon Ossoff and Raphael Warnock, Biden stressed that votes in Georgia will ripple beyond the Peach State to shape the success of the incoming president’s agenda nationwide.

“By electing Jon and the reverend, you can break the gridlock that has gripped Washington and this nation,” Biden said at a campaign rally. “With their votes in the Senate, we’ll be able to make the progress we need to make on jobs and health care and justice and the environment and so many other things.”

If Democrats Ossoff and Warnock beat Republican Sens. David Perdue and Kelly Loeffler, respectively, Biden’s party will control the Senate for the next two years. One GOP win means Republicans hold the chamber — and more sway over what policy emerges from Washington.

Biden will sit in the White House after Jan. 20. Speaker Nancy Pelosi’s Democratic House majority will work to pass his agenda. Still, a Senate led by GOP Majority Leader Mitch McConnell can steamroll Biden at every turn — on legislation, executive branch nominees and judges.

“If Democrats win, they will have the means to get his nominees and legislation approved with or without GOP support,” Darrell West, vice president and director of governance studies at the Brookings Institution, said in an email. “Since most Republicans are likely to oppose some nominations and things such as big spending packages or tax increases on the wealthy, GOP control would make it very difficult for Biden to implement the things he campaigned on.”

Political luminaries and donors big and small across the country have plunged into the Georgia runoffs because the two races alone will decide Senate control. If both Perdue and Loeffler win, Republicans would hold a 52-48 majority. One GOP victory would lead to a 51-49 edge for the party.

If Democrats sweep both races, each party will have 50 seats. Vice President-elect Kamala Harris would then hold a tiebreaking vote. Senate Minority Leader Chuck Schumer, D-N.Y., rather than McConnell, would decide what happens on the Senate floor.

Schumer has said Democratic control of the chamber “would be the biggest difference maker” to help Biden to implement his campaign plans.

“The best way to ensure that positive agenda can be carried out and deliver help to working families in Georgia and across the country is to elect Raphael Warnock and Jon Ossoff to the Senate,” Schumer said in a November statement after Biden’s presidential election win.

Republicans see Georgia as their last defense against Democratic policy. Perdue, at 71 vying for his second six-year term, and Loeffler, a 50-year-old appointee aiming to serve the final two years of retired GOP Sen. Johnny Isakson’s term, have called the runoffs their party’s last chance to stop what they describe as socialism.

Georgia helped to propel Biden to the White House in November by delivering an 11,779-vote victory. In his two-month push to overturn the democratic election, President Donald Trump has pressured Georgia officials to toss out valid votes.

The Nov. 3 Senate races went to runoffs when no candidate received 50% of the vote.

Even if Democrats win both races, Biden will likely need varying levels of GOP support in the Senate to accomplish his priorities. Legislation needs 60 votes to clear a Senate filibuster, meaning even a Democratic majority would need Republican support for most bills. An exception is the once-a-year budget reconciliation process, which the GOP used in 2017 to pass its tax law with a majority vote.

The Senate can confirm Cabinet nominees and judges with a simple majority. Control of the chamber and its committees also lets a party decide when to hold hearings and send a nomination to the Senate floor.

While some Democrats have pushed for ending the filibuster and expanding the Supreme Court, Biden has not yet embraced either idea.

Biden has said another coronavirus relief package will be his priority when he takes office. While Democrats could pass an aid bill with GOP support, a Senate majority would help them shape it more to their liking. McConnell may resist holding a vote on a proposal that includes state and local government relief — a Democratic priority — or excludes liability protections for businesses, which Democrats oppose.

Ossoff, a 33-year-old investigative filmmaker, and Warnock, the 51-year-old pastor at the Ebenezer Baptist Church in Atlanta, hammered Perdue and Loeffler for months over Congress’ failure to send more pandemic aid. The Republicans eventually voted for a $900 billion year-end aid package and voiced support for $2,000 direct payments after Trump pushed for them.

Biden on Monday tied the runoffs to Washington’s ability to send out checks.

“If you send Jon and the reverend to Washington, those $2,000 checks are going out the door, restoring hope and decency and honor to so many people struggling right now,” he said.

Biden’s economic recovery platform has planks that many or most Republicans will oppose. The plan includes tax increases on corporations and the wealthiest Americans and clean-energy infrastructure projects (likely fueled by significant public funding).

The Democratic president-elect has also pushed for a public insurance option. The vast majority of Republicans oppose adding more government health-care plans, while some more conservative Democrats have shied from the idea. The proposal may not see the light of day in a GOP-held Senate.

Most GOP lawmakers oppose a $15 per hour federal minimum wage. Biden and Democratic congressional leaders aim to increase the hourly pay floor to $15 from $7.25.

Many of Biden’s Cabinet nominees by design would get through a Republican-led Senate. The GOP will offer little opposition to choices such as Janet Yellen for Treasury secretary.

GOP senators have targeted at least one pick: Neera Tanden, Biden’s choice to lead the Office of Management and Budget. She would benefit from Democrats taking control of the chamber, according to Brookings’ West.

Democrats are eager to win the Georgia runoffs because it may be their best chance to control the White House, House and Senate for years to come. Republicans could gain ground in 2022 as the president’s party loses seats in most midterm elections.

Democrats enter the new Congress with 222 seats, four more than the 218 needed for a majority. While Republicans will have to defend at least 20 Senate seats in 2022 and Democrats will try to hold 13, the GOP could have the more favorable political environment.

The potential loss of power makes Georgia and the next two years more important for Biden’s agenda.

“He should push his highest priority items right away because there is no guarantee his party will control the House or Senate after the midterm elections,” West said.

Looking to open an offshore bank account?  Give Vanuatu a try.  Open a personal and/or corporate bank account today.  Easy to do.  Watch your money grow.  Vanuatu is a haven for investors.  Learn more at #topcompanyformation.com