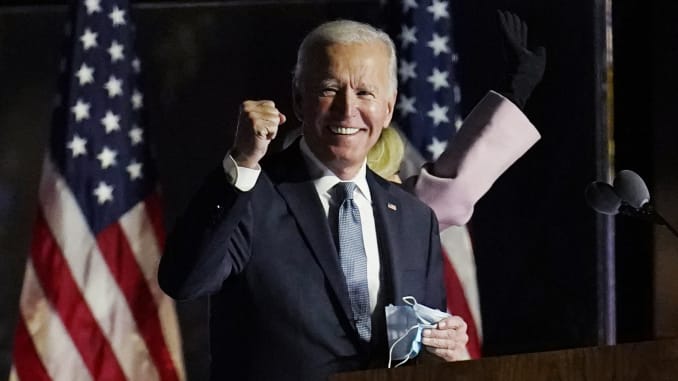 Biden projected to win 3 votes in Maine, Trump to win 1

Democratic nominee Joe Biden is projected to win three of Maine’s electoral votes, while President Donald Trump will win one, according to NBC News.

Maine is one of two states that does not use a winner-take-all system when distributing its four electoral votes. Maine and Nebraska have both adopted laws that distribute their electoral votes in part by the statewide popular vote winner and in part by who gets more votes in each of their congressional districts.

The call leaves Biden with 237 electoral votes and Trump with 214, by NBC’s count Wednesday afternoon.

Biden is the apparent winner in Wisconsin

NBC News projected that Joe Biden is the apparent winner in Wisconsin, a state President Donald Trump won in 2016.

Winning the state enhances Biden’s edge in the battle for the Electoral College. The Trump campaign has said it would seek a recount in the state. With 99% of precincts reporting, Biden had a 20,000-vote lead, according to NBC.

The Trump campaign announced it had filed a lawsuit to “halt counting” of ballots in Michigan until it is granted “meaningful access” to observe key ballot-counting locations.

Trump campaign manager Bill Stepien also said in a statement that they “demand to review those ballots which were opened and counted while we did not have meaningful access.”

“President Trump is committed to ensuring that all legal votes are counted in Michigan and everywhere else,” Stepien said.

A person at the Michigan Court of Claims clerk’s office told CNBC in a phone call that the court has not yet received the Trump campaign’s lawsuit.

The lawsuit comes as Trump and Biden appear to be in an extremely tight race in Michigan. NBC News has not yet made a call on which candidate is projected to win the state’s 16 electoral votes.

Biden announced on his Twitter page the creation of the Biden Fight Fund, a fundraising operation that can raise six-figure checks for any legal battles that could unfold in the coming days.

“To make sure every vote is counted, we’re setting up the largest election protection effort ever assembled. Because Donald Trump doesn’t get to decide the outcome of this election — the American people do,” Biden said in the tweet.

The ActBlue site says that the Biden Fight Fund will split donations to the DNC and Biden’s recount account.

Trump has threatened numerous legal maneuvers, including a recount in Wisconsin. NBC News has yet to project the winner of that race for either candidate. His campaign said Wednesday that they would sue to halt the count in Michigan. That state has yet to be called, too.

Going into the middle of October, the DNC’s legal fund had raised over $22 million, and the Republican National Committee’s fund had brought in just over $14 million, according to data from the nonpartisan Center for Responsive Politics.

NBC News calls a candidate the “apparent winner” when they are projected to win but the race remains close enough that it could be affected by a recount or other factors.

Sara Gideon, a Democrat who challenged the Republican incumbent, conceded on Wednesday afternoon.

In the hard-fought campaign, Gideon was seen leading in the polls in the runup to Election Day. Even so, Collins, who has served as a senator for Maine since 1997, was able to hang on to her seat, giving Republicans an important win as they battled to retain control of the upper chamber.

“Mainers rallied around our campaign in a way I’ve never seen before. And while we came up short, I do believe Mainers in every corner of this state are ready to continue to work together to make a difference,” Gideon, who is the speaker of the Maine House of Representatives, said on Facebook.

“Just now I spoke with Sen. Collins. I congratulated her on winning this election. And I told her that I will always be available to help serve the people of Maine. Ultimately, that’s why I entered this race. And it’s why I got involved in public service in the first place.”

Democrats criticized Collins for supporting the nomination of Justice Brett Kavanaugh to the Supreme Court as well as her vote to acquit President Donald Trump at his impeachment trial.

Correction: An earlier version of this story incorrectly stated the year Susan Collins became a Maine senator. It was in 1997.

A stock trader wearing a mask walks near social distancing signs the day a new IPO is launched at the New York Stock Exchange as the city continues Phase 4 of re-opening following restrictions imposed to slow the spread of coronavirus on August 27, 2020 in New York City. The fourth phase allows outdoor arts and entertainment, sporting events without fans and media production.
Alexi Rosenfeld | Getty Images

Financial advisory firm Signum Global is telling clients that the election will not be going the way they first predicted back in June.

The Wall Street advisory firm gave the update to their client in a note written in part by the group’s chairman, Charles Myers. While it did say they are standing by their prediction of Joe Biden defeating President Donald Trump, they conceded that the Senate is likely a lost cause for Democrats.

“Our updated view is that the Senate will now be kept by Republicans, as the Democrats, having lost Alabama (as we expected), need four pickups to get to 50 and, with a Democratic Vice President, Senate control,” the note reads. “We had thought they would win Arizona, Colorado, Maine, and North Carolina, and possibly Montana and Iowa.”

Myers was the vice chairman of the investment firm Evercore before opening Signum. During the presidential election, Myers was one of many Wall Street executives bundling for Biden’s campaign.

“Clients are happy because one of the two best possible outcomes are going to happen. First Trump wins with the Senate and we see large stimulus, more tax cuts and deregulation. Or second Biden win with divided government, so no real tax increases, much more centrist administration, cabinet and policies,” Myers said. “Our base case is the latter. But for the markets those are the top two best outcomes. And one of them will happen.”

Though Democrats did win the Senate race in Colorado, and are leading in Arizona, they appear to be on the path of falling short of becoming the majority.

The firm conceded that Trump and Republicans as a whole outperformed their expectations, including gaining some seats in the House of Representatives.

“At this stage, it seems fairly clear that Trump and the Republicans far outperformed our expectations,” the note says. “While the Democrats will likely keep the House, they will do so by a narrower margin than we had expected.”

Markets on Wednesday seemed to be surging on the idea that there could be a few years of a divided government in Washington.

Many internet users who can be potential customers of your brand or product, have installed ad blocking applications in order to avoid being annoyed by ads while surfing the net. In this sense, influencer marketing is not affected, as your potential customers are happy to hear out and follow their chosen influencers.