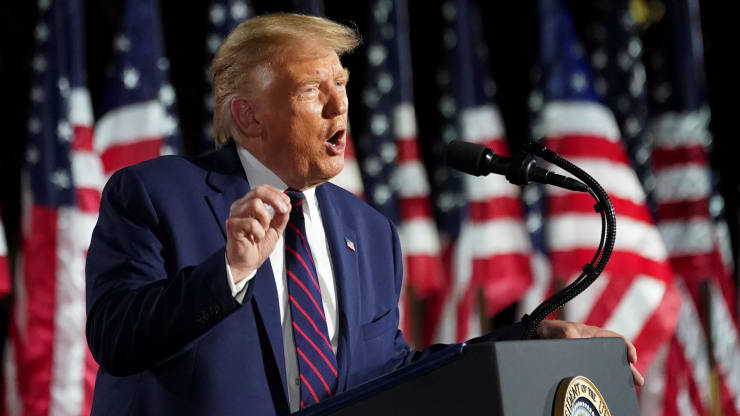 Painting a picture of horrors he claims await Americans if Democrat Joe Biden defeats him in November, President Donald Trump capped the 2020 Republican National Convention on Thursday by accepting his party’s presidential nomination for the second time.

Trump vouched for his reelection in a more than 70-minute speech on the White House South Lawn, with the president’s official residence in the background. Mixing official government and political business, he spoke to a crowd sitting shoulder to shoulder during a pandemic, flanked by “Trump Pence” campaign signs.

In his remarks, the president outlined what he considers the triumphs of his first term in office, including trade deals and an economy that was strong before coronavirus-fueled shutdowns. Trump made lofty promises, assuring rapid job growth and a reined in coronavirus outbreak.

He also took aim at the former vice president Biden, claiming his election would lead to an economic collapse and violence in American cities.

Here are some of the highlights from Trump’s speech, as prepared for delivery by his campaign.

We are delivering lifesaving therapies, and will produce a vaccine before the end of the year, or maybe even sooner. We will defeat the virus, end the pandemic, and emerge stronger than ever before.

The coronavirus pandemic has ravaged the United States. The nation has recorded 5.8 million Covid-19 infections and at least 180,000 deaths, the most in the world, according to data compiled by Johns Hopkins University. While new cases have showed signs of slowing, the country is still reporting tens of thousands per day on average.

The U.S. has moved to produce a vaccine in record time to combat the once-in-a-lifetime pandemic. Trump has even said he is “optimistic” a vaccine will be ready before Election Day.

But there is no concrete evidence now that a safe and effective vaccine will be ready before the end of the year, let alone sooner. Clinical trials are taking place for vaccines, and public health officials have said they hope to know whether one of those could be effective by the end of the year.

The United States has a case fatality rate of 3.1%, according to Johns Hopkins. The American rate is better than European countries Italy, Belgium, France, the Netherlands, Spain and Germany.

However, Trump misleads about the American death toll by citing case fatality rates. Because the virus has spread rapidly in the U.S., it ranks among the worst countries in deaths as a share of population.

Biden is a Trojan horse for socialism. If Joe Biden doesn’t have the strength to stand up to wild-eyed Marxists like Bernie Sanders and his fellow radicals, then how is he ever going to stand up for you?

The most dangerous aspect of the Biden platform is the attack on public safety. The Biden-Bernie manifesto calls for abolishing cash bail, immediately releasing 400,000 criminals onto your streets and into your neighborhoods.

When asked if he supports cutting police funding, Joe Biden replied, “Yes, absolutely.” When Congresswoman Ilhan Omar called the Minneapolis police department a cancer that is “rotten to the root,” Biden wouldn’t disavow her support and reject her endorsement – he proudly displayed it on his website.

Make no mistake, if you give power to Joe Biden, the radical left will defund police departments all across America. They will pass federal legislation to reduce law enforcement nationwide. They will make every city look like Democrat-run Portland, Oregon. No one will be safe in Biden’s America.

While Biden has made some policy concessions to supporters of Sen. Bernie Sanders, the democratic socialist and runner-up in the 2020 Democratic primary, he has angered liberals by not backing their top priorities including “Medicare for All” and the Green New Deal.

On criminal justice, the Biden campaign has backed ending cash bail, saying it “incarcerates people who are presumed innocent.” But it has not supported defunding police departments, a goal for many liberals.

While Biden has pushed for reforms to hold police more accountable for killing Black Americans, he has actually called for $300 million more in federal funding for cops.

Biden has promised to abolish the production of American oil, coal, shale, and natural gas – laying waste to the economies of Pennsylvania, Ohio, Texas, North Dakota, Oklahoma, Colorado, and New Mexico. Millions of jobs will be lost, and energy prices will soar. These same policies led to crippling power outages in California just last week. How can Joe Biden claim to be an “ally of the light” when his own party can’t even keep the lights on?

Biden has not gone as far as Sanders and other liberals in pushing to limit fossil-fuel production. He has called to stop new oil and gas drilling permits on public land, but does not want to stop existing production.

He also has not pushed to ban the controversial practice of hydraulic fracturing, as some Trump allies have claimed.

Biden’s record is a shameful roll call of the most catastrophic betrayals and blunders in our lifetime. He has spent his entire career on the wrong side of history. Biden voted for the NAFTA disaster, the single worst trade deal ever enacted; he supported China’s entry into the World Trade Organization, one of the greatest economic disasters of all time.

Biden supported the North American Free Trade Agreement as a senator and the Trans-Pacific Partnership as vice president. NAFTA, the three-nation deal with Canada and Mexico, is generally accepted to have sapped American manufacturing jobs after companies moved operations outside of the U.S.

Trump used criticism of trade deals to appeal to blue-collar workers during his 2016 campaign.

They said that it would be impossible to terminate and replace NAFTA – but again, they were wrong. Earlier this year, I ended the NAFTA nightmare and signed the brand new U.S.-Mexico-Canada Agreement into law. Now auto companies and others are building their plants and factories in America, not firing their employees and deserting us.

While Trump renegotiated NAFTA, the new pact known as the United States-Mexico-Canada Agreement made only moderate changes to the existing deal. It also included some components similar to those in the TPP, the deal in which the Obama administration joined. Trump withdrew from it.

During their convention, Joe Biden and his supporters remained completely silent about the rioters and criminals spreading mayhem in Democrat-run cities. In the face of left-wing anarchy and mayhem in Minneapolis, Chicago, and other cities, Joe Biden’s campaign did not condemn it – they donated to it. At least 13 members of Joe Biden’s campaign staff donated to a fund to bail out vandals, arsonists, looters, and rioters from jail.

Following a string of police shootings and killings of Black Americans this year, protests against racial injustice have taken place across the country. Most recently, Americans have spoken out against the police shooting of 29-year-old Black man Jacob Blake seven times in the back in Kenosha, Wisc.

In several cities, people angered by the brutality have destroyed property in isolated incidents. Trump has focused more on those events, framing them as a danger to public safety, than on solutions to reduce the use of excessive force by law enforcement.

Contrary to Trump’s claims, Biden has repeatedly condemned riots as he supports protests. This week, he said that “burning down communities is not protest, it’s needless violence.”

Online reputation repair involves a number of steps and methods. First of all, finding out the main cause and issue that lead to negative online reviews and content, and fixing the related problem, is key to avoiding additional negative reviews and eliminating further damage to online reputation.