Latest News
Home People Trump says U.S. ‘in the process’ of crafting coronavirus strategy that has ‘developed as we go along’ 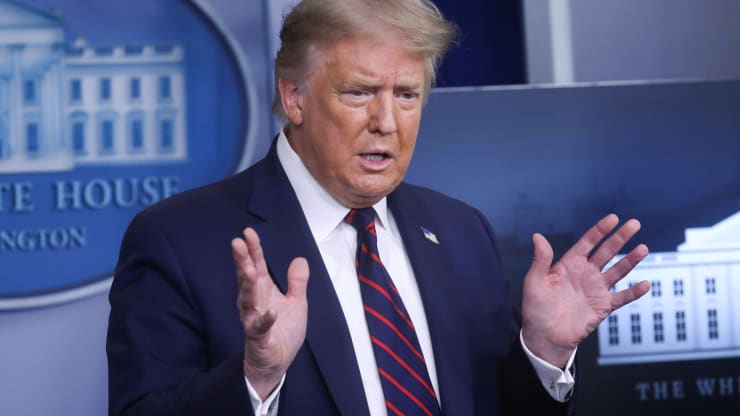 Trump says U.S. ‘in the process’ of crafting coronavirus strategy that has ‘developed as we go along’

President Donald Trump said Tuesday that his administration is “in the process of developing a strategy” to combat the coronavirus pandemic, adding that that plan of action has “developed as we go along.”

Trump’s remarks came more than six months after the first coronavirus cases were reported in the United States. At least 141,000 people in the U.S. have now died from Covid-19 and more than 3.8 million have been infected, according to data from Johns Hopkins University.

“We’ve learned so much about this disease and we know who the vulnerable are, and we are going to indeed shield them,” Trump said during his first news conference on Covid-19 from the White House briefing room in nearly three months.

The virus “is a vicious and dangerous illness, but we’ve learned a great deal about it and who it targets,” the president said.

“We are in the process of developing a strategy that’s going to be very, very powerful. We’ve developed as we go along,” he said. “Some areas of our country are doing very well, others are doing less well.”

Trump then laid out a list of actions his administration has taken, such as boosting the availability of tests for the virus and deploying thousands of National Guard members to states dealing with the most severe outbreaks.

“Ultimately our goal is not merely to manage the pandemic but to end it,” Trump said, noting that a “top priority” of his administration is developing and distributing an effective vaccine.

Trump, who faces a tough reelection fight in November, has previously urged state leaders to quickly reopen their state economies, many of which had been devastated by the strict lockdown measures implemented to try to slow the spread of the virus.

But with multiple states reporting record-breaking surges in infections and hospitalizations in recent weeks, Trump acknowledged Tuesday that the pandemic will probably “get worse before it gets better.”

“That’s something I don’t like saying about things, but that’s the way it is, it’s what we have,” said Trump, who has previously called himself a “cheerleader” for the country. “You look over the world, it’s all over the world.”

The president had attended those near-daily briefings. But they all but ended in late April, shortly after Trump speculated about whether disinfectants could be injected to treat the virus. He later claimed he had posed that question sarcastically.

On Monday, Trump announced he would resume the briefings. But no members of the White House coronavirus task force accompanied him at the Tuesday evening briefing on the virus.