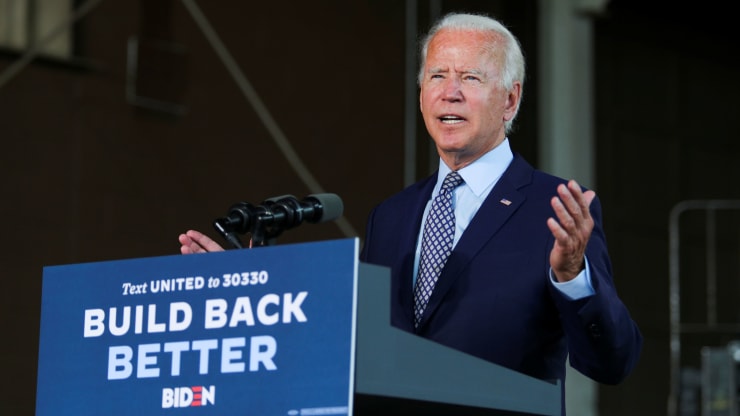 Joe Biden took to the podium Thursday in Dunmore, Pennsylvania, to unveil his economic platform as a candidate running for president of a country facing simultaneous economic, health and racial crises.

The presumptive Democratic nominee’s message was different than the one he laid out previously in the swing state in 2019, when the unemployment rate was around 3% and he had to remind the country there was a “forgotten America” struggling even as the U.S. economy soared.

With unemployment at 11% and unemployment claims surpassing 1 million weekly, he sought not to remind Americans there was pain, but to promise he could ease it.

The message Biden laid out in opening remarks echoes ideas from progressive Democrats, who have pushed behind the scenes for Biden to use this historic moment to rewrite the rules with drastically wider social safety nets and higher taxes on the wealthy.

The policies themselves were not starkly different from those that Biden had previously outlined, though. He echoed his call for Amazon to pay income taxes. He said he would raise the U.S. corporate tax rate to 28% from the current 21%, just as he did previously. He also again pushed for a $15 an hour federal minimum wage.

But his rhetoric reflected America in 2020, which is rife with anger from many on Main Street who believe that Wall Street is getting bailed out ahead of them.

″[In this] crisis, Donald Trump has been almost singularly focused on the stock market, the Dow and Nasdaq. Not you, not your families,” he said. “If I’m fortunate enough to be elected president, I’ll be laser-focused on working families, the middle-class families … we must reward work as much as we rewarded wealth.”

He spoke to racial inequality that the coronavirus pandemic has laid bare, having promised earlier in the day he would invest $70 billion in minority-led colleges and universities.

He chastised the principle of “shareholder capitalism” and told the audience that “Wall Street bankers and CEOs didn’t build America.” It was built, instead, by labor and unions who made the middle class, he said.

Biden, who often speaks of his youth in nearby Scranton, Pennsylvania, has been gaining momentum in the state. A RealClearPolitics average of recent polls shows Biden ahead of Trump in the state.

Biden earlier in the day rolled out a $700 billion manufacturing and innovation plan that reflects a coronavirus America. The large price tag shows how big of a gap he believes there is to fill. Its focus on U.S.-made products reflects a country even more unnerved by the country’s dependency on China, as its supply chains have been threatened by the global health crisis.

That dependency has also been a battle cry for Trump.

“Let’s use this opportunity to make bold investments in American industry and innovation so the future is Made In America — and in all of America,” Biden said.

His plan includes $400 billion to invest in products and materials the U.S. needs. It will offer a tax credit to companies that renovate or revive their facilities.

Biden is also pledging a $300 billion investment in research and development in technologies spanning electric cars to 5G.

“The Chinese are spending billions of dollars trying to own the technology of the future while we sit with our thumb in our ear,” he said.

Biden did not outline Thursday how he would pay for the plan.

He said his manufacturing plan would add 5 million jobs.

As Biden completed his speech, he addressed those workers and industries particularly hit by the pandemic, calling out working parents, teachers and first responders

“It’s time not only to clap for them, it’s time to pay them,” he said, before touting his health-care plan, which does not embrace the progressive-backed “Medicare for All” idea. Rather, Biden proposed a public health insurance option, as he had before.

“And let’s finish the job of Obamacare by ensuring everyone has access to quality affordable health care.”

Have you ever thought about maybe starting to post to social media and getting paid for it? There are ways that you can go about doing this and TOP platform is the best place to get started on finding the right area to look for those clients. TOP has many services and among them is the chance to become a trender with them.