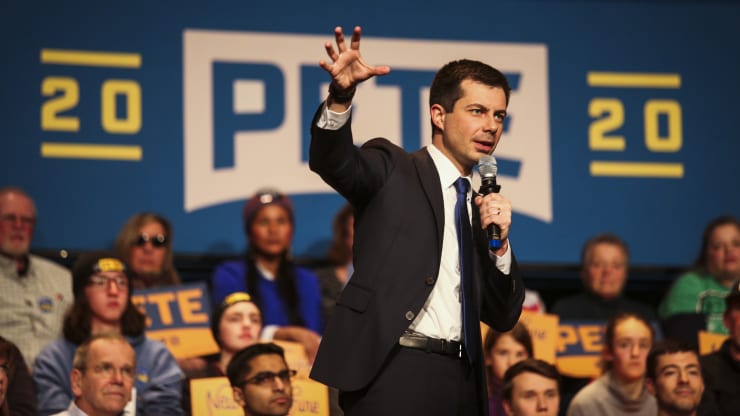 “Under my administration, local governments will finally have a partner in Washington,” Buttigieg wrote in the plan. “As a former mayor, I know that priority-based budgets made locally are better than budget-based priorities set in Washington.”

Buttigieg was the mayor of South Bend, Ind. for eight years until his second term expired at the start of the year. He is polling in fourth place in national surveys of the Democratic primary contest.

The campaign said that the plan will be paid for by reforming the capital gains tax and repealing the 2017 GOP tax overhaul, reforms that had been previously disclosed. The campaign will also raise the estate tax, with a top rate of 65% for billionaires. The plan will create 6 million jobs, the campaign said.

“The bulk of the expense in the plan is already covered in our climate resiliency plan that was previously released,” Tess Whittlesey, a spokeswoman, said in an email.

The infrastructure plan includes the following:

President Donald Trump has made infrastructure a key priority, though his efforts have so far failed to gain traction.

A bipartisan infrastructure deal he championed last year fizzled as conservatives balked at the price tag. As a first-time candidate, Trump campaigned on a $1 trillion infrastructure package.

Buttigieg wrote in the plan that the Trump administration “has been incapable of keeping its promise to pass major infrastructure legislation, and critical projects around the country are stalled because of it.”

“Meanwhile, our roads and bridges crumble, our schools fall into disrepair, water systems poison our children, and our flood protection systems fail as climate change accelerates,” he wrote.

Buttigieg is angling to make a splash in the upcoming primaries and caucuses, which kick off in less than a month in Iowa, where the 37-year-old Democrat is jockeying for first place with Sen. Bernie Sanders, I-Vt.

Sanders has advocated for the Green New Deal, a sprawling set of environmental and infrastructure reforms that include “upgrading all existing buildings in the United States and building new buildings to achieve maximum energy efficiency, water efficiency, safety, affordability, comfort, and durability.”

Buttigieg has also said he supports the Green New Deal, though it is less central to his bid.

Sen. Elizabeth Warren, D-Mass., has pledged a variety of infrastructure reforms in her plans for rural America and the environment.

“Essentially what photography is, is life lit up.”— Sam Abell – Visit The Online Publishers TOP online photos for inspiring, professional photography. Want To Start Selling Your Photos Online? Here Are the Steps to Follow