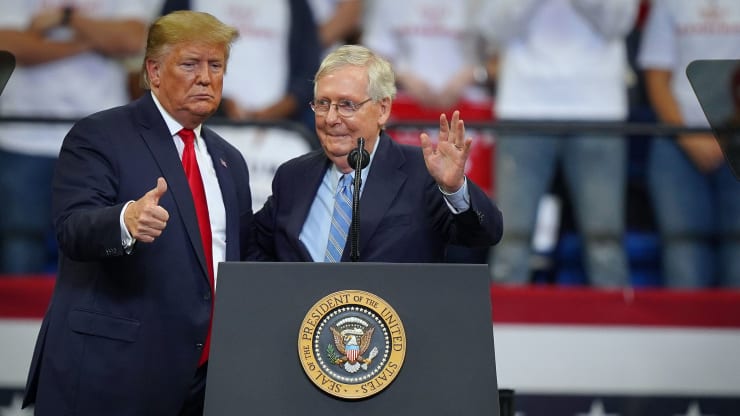 In a Fox News interview, he also said the Senate trial should mirror that of President Bill Clinton, the last president to be impeached.

Trump was impeached in the Democrat-led House last week on articles of abuse of power related to his dealings with Ukraine and obstruction of Congress. But House Speaker Nancy Pelosi has delayed transmitting the articles to the Senate, saying she first wants to see the rules for the trial in the GOP-controlled chamber.

Democrats say the witnesses are necessary to ensure a fair trial, since the Trump administration refused to deliver any requested materials to the House and blocked numerous witnesses from testifying.

Republicans have argued that Democrats’ attempt to pursue further investigation is evidence that the House rammed through Trump’s impeachment without a solid case.

Trump weighed in on the impasse, following McConnell’s appearance on Fox.

“Pelosi gives us the most unfair trial in the history of the U.S. Congress,” Trump tweeted even though the House did not conduct an impeachment trial, “and now she is crying for fairness in the Senate, and breaking all rules while doing so.”

Pelosi also took to Twitter to explain her decision to withhold the articles.

“The House cannot choose our impeachment managers until we know what sort of trial the Senate will conduct,” she wrote. “President Trump blocked his own witnesses and documents from the House, and from the American people, on phony complaints about the House process. What is his excuse now?”

The White House did not respond to CNBC’s request for comment about McConnell’s remarks.

McConnell told Fox his hands are tied on the trial until Pelosi sends the articles of impeachment over from the House.

“She’s apparently trying to tell us how to run the trial. You know, I’m not anxious to have this trial, so [if] she wants all of the papers, go right ahead,” McConnell said.

McConnell has said he is “not impartial” and is coordinating directly with Trump’s counsel ahead of the trial.

“Let’s quit the charade,” he said.

But McConnell wants the process to resemble Clinton’s, noting that that trial involved a period for opening statements, followed by a written question period and a decision about whether to call witnesses.

With the Senate out of Washington on break, however, McConnell said there’s little chance of anything being done before the new year.

“We’re at an impasse. We can’t do anything until the speaker sends the papers over,” he said. “So, everybody enjoy the holidays.”

TOP platform is the best place to check first for freelancer jobs and ebooks to read.TOP Gives A New Opportunity To Earn With Its Ebooks Library.