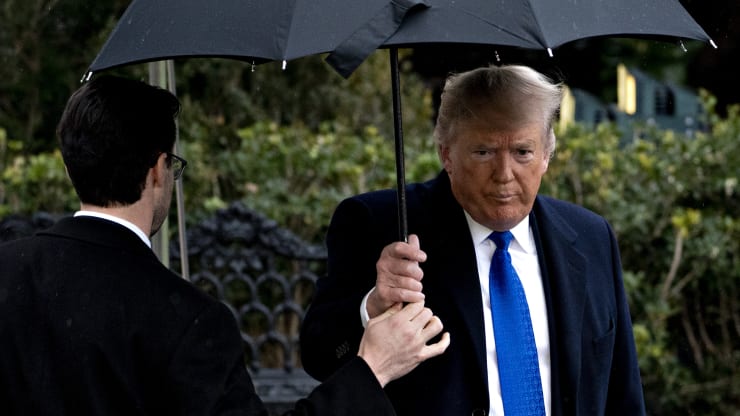 Trump says Democrats ‘not nice!’ for holding impeachment hearings while he’s overseas — but GOP did same to Clinton

President Donald Trump criticized House Democrats on Monday for scheduling a key impeachment hearing during his trip to London for a NATO meeting — 21 years after House Republicans conducted impeachment proceedings against President Bill Clinton while he was on several overseas trips.

Trump accused Democrats in a tweet of “purposely” scheduling the first House Judiciary Committee hearing on impeachment against him for Wednesday, saying that was “not nice!”

“The do-nothing Democrats decided … that when I’m going to NATO, that was the exact time … they’d hold an impeachment hearing,” Trump told reporters at the White House before departing for London.

The House is pursuing an impeachment inquiry of Trump as a result of his pressuring the newly elected president of Ukraine to investigate former Vice President Joe Biden and a debunked conspiracy theory involving the 2016 presidential election. The pressure campaign came at the same time that Trump was withholding congressionally appropriated military aid to Ukraine.

Rep. Mark Meadows, R-N.C., in his own tweet accused his Democratic counterparts of “extremely poor form, and another instance of an unfair and unserious process” against Trump.

Secretary of State Mike Pompeo, formerly a Republican House member from Kansas, said on Fox News on Monday that the timing of the House Judiciary hearing is “very unfortunate.”

Pompeo said there is a long-standing tradition to support a president when he travels overseas.

But Republicans in late 1998 and into 1999 conducted proceedings related to the impeachment of Clinton when he was traveling abroad.

On Nov. 19, 1998, Kenneth Starr, the independent counsel who investigated Clinton for years, testified for more than two hours to the House Judiciary Committee — which at the time was controlled by Republicans — about the Democratic president.

Starr accused Clinton of “an unlawful effort to thwart the judicial process,” by lying under oath during a deposition in a sexual harassment lawsuit about his relationship with White House intern Monica Lewinsky.

On the day Starr testified in Washington, Clinton was traveling in Japan, where he met with Emperor Akhito and Prime Minister Keizo Obuchi.

The Judiciary Committee on Dec. 11, 1998, approved three articles of impeachment against Clinton.

The next day, the committee approved a fourth article of impeachment. At the time of that vote on Dec. 12, Clinton was traveling in Israel, where he met with Prime Minister Benjamin Netanyahu.

Clinton was impeached by the House but was acquitted at a trial in the Senate.

On the day Nixon’s lawyers began his defense at the committee, June 27, 1974, the president was beginning an official visit to the Soviet Union.

Nixon resigned two months later after it became clear he would be impeached and likely convicted by the Senate.

2 Easy Ways TOP Helps You Get Paid For Social Media

Finding fresh ebook content today is a lot easier thanks to The Online Publishers “TOP platform“. Writers worldwide have signed up with TOP and share their unique stories about a wide range of topics.