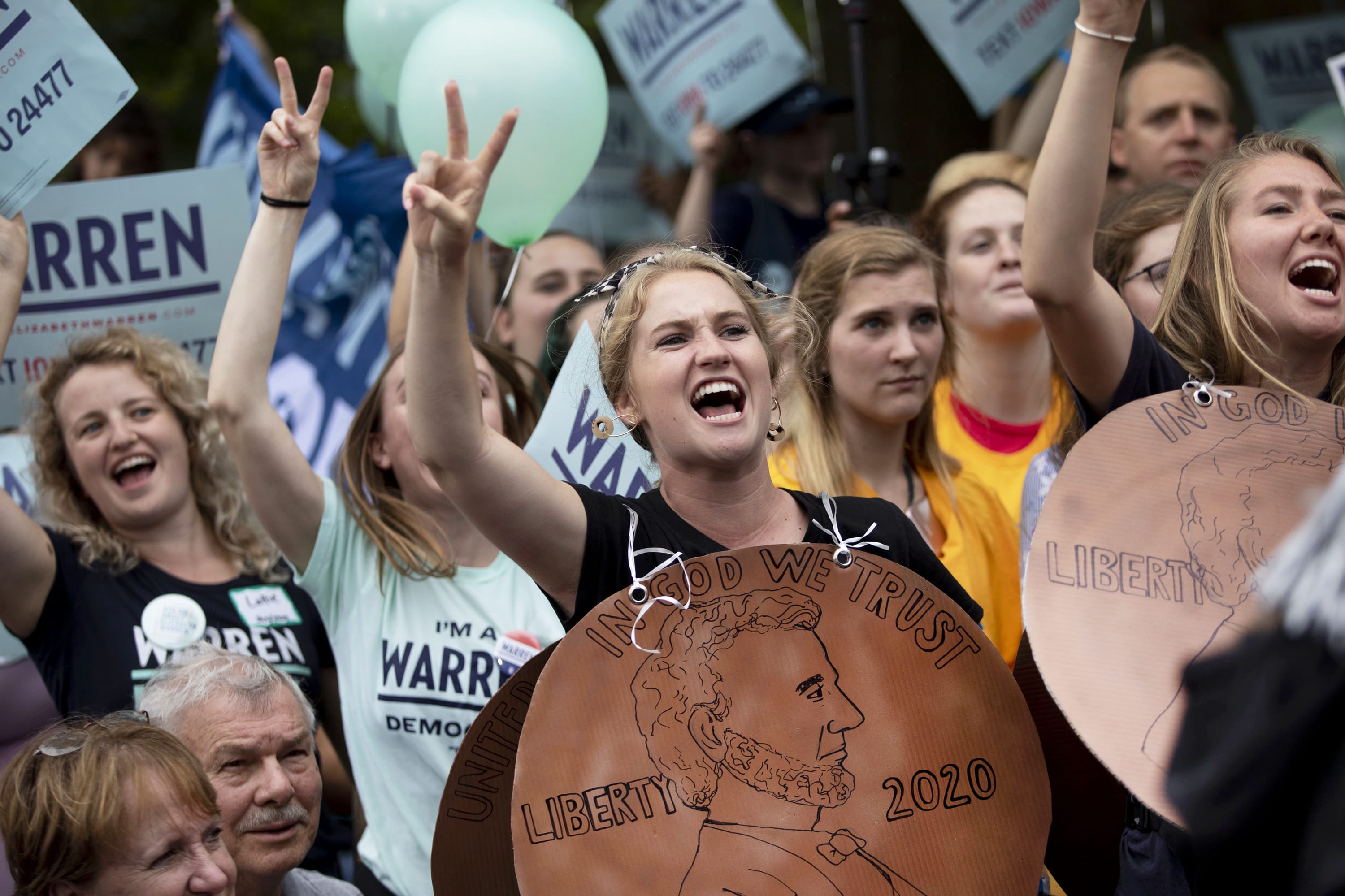 The two words that are powering Warren’s rise and rallies

Warren’s wealth tax, which taxes wealth over $50 million at 2%, has quickly become the energizing force of her campaign and helped propel her rise in the polls. Her surge not only speaks to the popularity of the tax, supported by more than 60% of Americans, but also Warren’s skills at turning wonky tax policy and debates over inequality into a catchy, simple slogan.

One way she helped get her message across was to discuss it by saying it was only 2 cents on the dollar for the super wealthy. Now, there are “two-cents” T-shirts, “two-cents” buttons and “two-cents” refrigerator magnets. At a recent campaign event in Iowa, two staffers dressed as pennies to fire up voters. At rallies in New York and Iowa, crowds held up two fingers and chanted “Two cents! Two cents!”

With those two words, Warren has managed to magically shrink a complex and confiscatory tax plan, which would grow the government coffers by over $200 billion a year, to a simple calculation. Who can argue that the super rich can’t afford two cents? Especially if it means better health-care and education for struggling Americans? How could a mere two cents be called socialism?

“All we’re saying is, when you make it to the top,” Warren said at a recent rally, “pitch in two cents so everybody else gets a chance to make it in America. Two cents! Two cents!”

In reality, Warren’s wealth tax is far more complex. It calls for an annual 2% tax on wealth over $50 million and 3% on wealth over $1 billion, with taxpayers expected to estimate the current value of everything from cars and real estate to art, private-equity porfolios and private businesses. About 70,000 families would pay the tax – at a time when most European countries have abandoned wealth taxes because they fail to meet revenue targets.

Lawrence Summers, the former treasury secretary under President Bill Clinton, wrote a paper with law professor Natasha Sarin that the Warren tax would “undermine business confidence, reduce investment, degrade economic efficiency and punish success in ways unlikely to be good for the country or even to be appealing to most Americans.”

For now, however, Warren’s growing army of supporters are giving America their two cents worth.

The Helpful Trend It Service.

How TOP Platform Solves A Need For Influencers Marketing.

The Best Way To Go About Finding FDI? To know more >> Theinternationalcampaigner.com

3 Reasons To Think About TOP For Online Reputation Building.

2 Reasons All Online Reviewers Need To Be With TOP.

3 Ways To Get Success With Freelance Jobs On TOP.