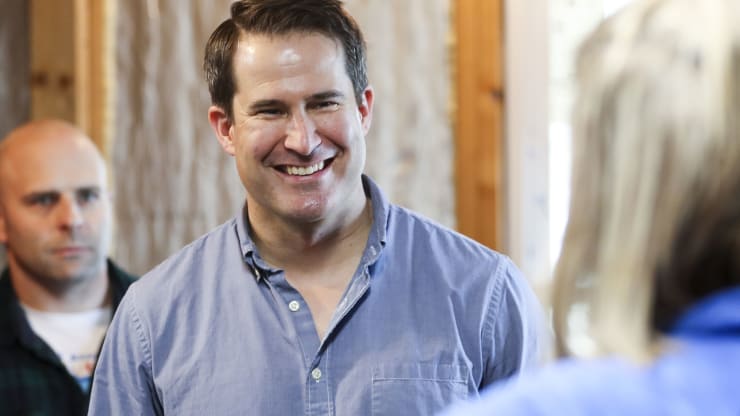 Democrat Seth Moulton drops out of the 2020 White House race

Rep. Seth Moulton, D-Mass., is dropping out of the 2020 presidential race.

“I think it’s evident that this is now a three-way race between Biden, Warren and Sanders, and really it’s a debate about how far left the party should go,” he told The New York Times. He planned to announce his decision in a speech Friday to the Democratic National Committee.

Moulton was one of the few candidates not to make the debate stages in June and July. Recently, his campaign seemed ready to stay in the race, even if Moulton didn’t qualify for the debates in September and October.

“Our campaign isn’t focused on the horse race. Early fall is not the time to be picking winners and losers,” campaign spokesman Matt Corridoni said. “We’re focused on taking our message directly to voters and having Seth resonate with them on the ground.”

Moulton will run for reelection to the House.

Moulton joined the Democratic primary field in April, touting his youth and military experience. While the Iraq war veteran called for boosting military spending, he also vowed to cut funds for “massive weapons programs” and invest in high-tech options.

On health care he staked out a more moderate path, promising to fix the Affordable Care Act. On climate change, he sided with progressives as a co-sponsor of the Green New Deal.

In his campaign launch video, Moulton focused on what he sees as the failures of President Donald Trump, who he said has “tried to take away health care for millions” and brought invasive trade wars that are “bankrupting our farmers and factories.”

But the congressman is perhaps best known for his opposition to Nancy Pelosi’s second bid to be Speaker of the House.

“This election was a call for change,” Moulton told reporters at a Massachusetts town hall after the 2018 midterms, when Democrats took back the House. “By just saying we’re going to reinstall the same status quo leadership we’ve had since 2006 … I don’t think we’re answering the call of the American people.”

Retired General Stanley McChrystal told MSNBC that he would endorse Moulton for his “character” and “personal competence … to shape and lead an honest good team.”

“If the photographer is interested in the people in front of his lens, and if he is compassionate, it’s already a lot. The instrument is not the camera but the photographer.” — Eve Arnold – Visit The Online Publishers TOP online photos for artistic, professional photography.

5 Great Services You Can Find With TOP Platform.

How Advertisers Can Get More Out Of A Site With TOP.