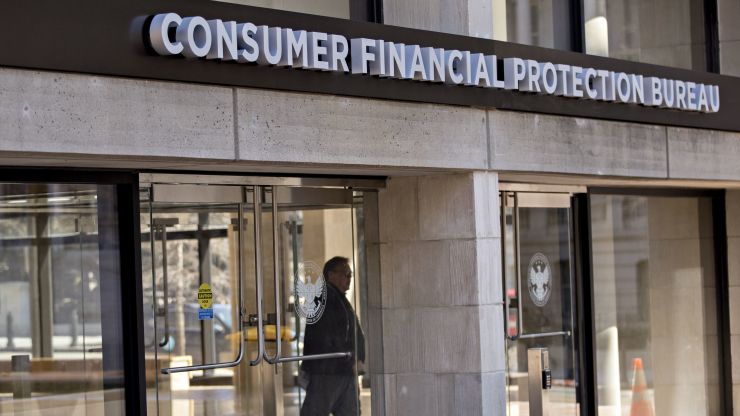 A voter who could be key to Elizabeth Warren’s 2020 hopes? Justice Brett Kavanaugh

In the brief biography included on her campaign’s Twitter account, Warren boasts that she is the “mom” of the agency. In Iowa, a staffer recently got the CFPB’s initials tattooed on her bottom lip.

But the fate of the Obama-era regulatory agency is now in the hands of a skeptical Supreme Court, which is weighing whether to take up a case that would allow it to rule on the constitutionality of the agency’s structure. The court is being asked to declare the CFPB — and all of its actions to date — unlawful.

The top court has not yet considered the matter. But Justice Brett Kavanaugh, who until October was a federal appeals court judge in Washington, made his views clear before his confirmation.

“The CFPB’s departure from historical practice, threat to individual liberty, and diminution of Presidential authority combine to make this an overwhelming case of unconstitutionality,” Kavanaugh wrote in a dissent in 2018. A little more than a year before, Kavanaugh authored an opinion, later overruled, striking down the agency.

In his first term on the bench, Kavanaugh has proven to be near the court’s ideological center.

If he and the court’s four other Republican-appointed justices put Warren’s signature accomplishment in the dust bin, the decision could dent the Massachusetts Democrat’s argument that she is the best presidential candidate to accomplish “big, structural change” while in office.

And it could focus attention on questions about the constitutionality of another Warren pledge, a federal wealth tax on the ultra-rich, which Warren says will raise the funds to pay for other key parts of her agenda. Those who advised Warren on the wealth tax plan have said they are uncertain about whether the top court will approve it.

The case is another instance in which the Supreme Court, with a newly reliable conservative majority, could hamper Democratic political goals. In the wake of Kavanaugh’s confirmation last year, liberal activists have pressured Democrats to reform the court, which they have argued has grown politicized.

Warren herself has indicated that she is open to expanding the size of the nine-member panel, drawing a contrast between herself and fellow progressive Sen. Bernie Sanders of Vermont, who has ruled out the idea.

In a sign of the rising political profile of the top court, a number of Democratic senators, including presidential contender Sen. Kirsten Gillibrand, filed an unusual brief with the justices this week telling them to “heal” or face the prospect of getting “restructured.”

The Warren campaign did not respond to multiple requests for comment. Warren has previously defended the constitutionality of the CFPB, and said that other government agencies, such as the Comptroller of the Currency, have similar structures.

The CFPB said in 2017 it had returned $12 billion in financial relief to consumers since it was created seven years earlier in the wake of the financial crisis. The Trump administration has severely curtailed its enforcement actions.

The Trump administration has signaled that it believes Kavanaugh could be a key vote in striking down the CFPB.

The last time the court was asked to review the constitutionality of the agency, it came in a case that Kavanaugh had ruled on while a federal appeals court judge. That meant that he would not have been able to vote on the matter as a justice.

The Department of Justice, which under President Donald Trump has argued that the CFPB is unconstitutional, urged the court to decline the case, and wait for one in which all nine justices could participate. In January, the justices declined to take the case.

Now, the court has a case before it that observers say it is more likely to review.

“One reason is that Kavanaugh is able to vote. Two, [Kannon] Shanmugan is a very well respected attorney,” said Ilya Shapiro, the director of the Robert A. Levy Center for Constitutional Studies at the Cato Institute, referring to the lawyer representing the petitioner in the case.

Shanmugan, a former clerk to the late Justice Antonin Scalia, argued four cases before the court last term, according to data compiled by Adam Feldman, the creator of Empirical SCOTUS. Shanmugan declined to comment.

“He doesn’t have a reputation for bringing ideological crusades, he’s a strong business lawyer,” Shapiro said.

The Cato Institute has filed multiple friend-of-the-court briefs at the Supreme Court arguing against the constitutionality of the CFPB.

Michael Barr, a former Obama Treasury Department official who was one of the architects of the 2010 Dodd-Frank Act, which created the CFPB, said that it wasn’t clear that the court will take up the case in the absence of an an appeals court ruling against the agency.

“There is no circuit split. Both the D.C. Circuit and the Ninth Circuit have affirmed the CFPB’s constitutionality,” Barr said. “Obviously, Justice Kavanaugh has expressed his views on the matter strongly already. But, on the question of the role of independent agencies in our society, I don’t think it’s an easy left-right, or Democratic-Republican split.”

This case against the CFPB was brought by the California-based consumer law firm Seila Law. The firm was investigated by the agency in 2017 over debt relief services it offers. Seila Law challenged the CFPB’s actions on the basis that the agency’s structure was unconstitutional.

That structure features a single director, appointed by the president, who serves a five-year term. Unlike other agency heads, once confirmed by the Senate, the head of the CFPB can only be removed if the president provides a good reason. (Warren had actually proposed a different structure, with a multimember commission.)

In papers filed with the top court, the law firm argues that the CFPB structure conflicts with the court’s longstanding precedents affirming the president’s authority to remove government officers at will. In the 1926 case Myers v. United States, the court held that authority was a prerequisite to faithfully executing the nation’s laws.

Lined up behind Seila Law is an array of powerful forces. The Chamber of Commerce and 12 states, led by Texas, have filed friend-of-the-court briefs supporting the law firm. The Trump administration, for the moment, is split on the issue. The Justice Department argues the CFPB is unconstitutional, while the CFPB continues to defend itself.

The CFPB has yet to respond to Seila Law’s petition. On Thursday, the agency asked for more time to respond. In a previous brief in the related case in Washington, the agency called the argument against it a “constitutional attack on the government’s primary enforcer of consumer financial laws.”

“Granted, most independent agencies have been headed by multimember commissions. But Congress’s departure from tradition is not unconstitutional because it does not diminish presidential control,” CFPB general counsel Mary McLeod wrote.

Despite the many attacks it has faced, the CFPB has survived every court challenge.

The federal appeals court in Washington, over dissents from Kavanaugh and others, reasoned that the Supreme Court had effectively approved the CFPB’s structure when it signed off on the Federal Trade Commission in the 1930s, in a case known as Humphrey’s Executor. As recently as 2010, the Supreme Court had validated restrictions on the president’s ability to fire financial regulators at the Securities and Exchange Commission, the court noted.

The U.S. 9th Circuit Court of Appeals cited that decision in its ruling against Seila Law earlier this year. Under Humphrey’s Executor and a later case, Morrison v. Olson, the court held the CFPB was constitutional.

“The Supreme Court is of course free to revisit those precedents, but we are not,” Circuit Judge Paul Watford wrote.

The justices will decide whether to take the case when they return from their recess in the fall. If they decide to review the matter, a decision will be expected by June.

Online Reputation Repair: How Does It Work?

Top 3 Reasons to Sell Your Photos to Thousands of Clients Online.

The Right Spot For Social Media Influencers To Make Money

3 Reasons You Find The Best Freelance Jobs With TOP Platform.

3 Great Benefits You Get From TOP Translation Services.

3 Great Benefits For Writers In Content Creation To Join With TOP.