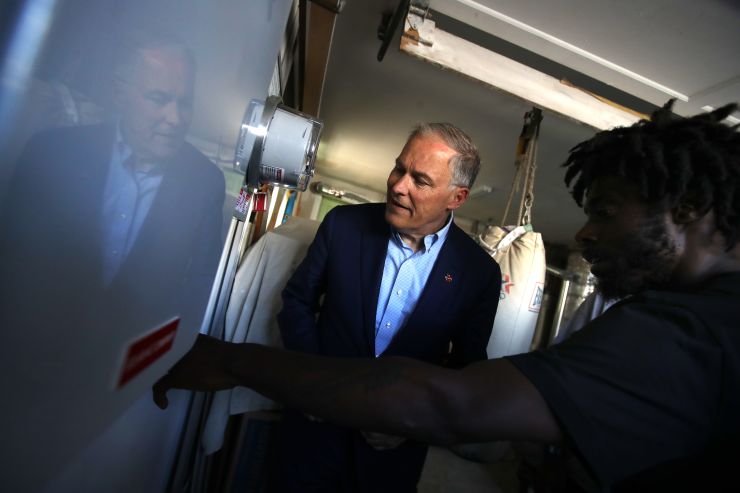 Many good policy ideas miss out on the daily cable news spin cycle after a big Democratic Party debate — but it is not for lack of trying. CNBC.com is interviewing presidential candidates this summer to gain insight on their vision and how it can impact the economic outlook for 37% of the 2020 electorate: millennials and Gen Z voters.

Set to be the first American generations to be worse off than their parents, facing the threat of climate change and struggling with how to pay for college, money matters matter to young voters in this election. This series is dedicated to giving every single candidate a platform to share their economic vision for America with the voters — and find out whether they prefer Hulu or Netflix.

CNBC: According to the fourth National Climate Assessment Report, the sector of our economy that will be most negatively impacted by climate change is the health-care sector, with weather-related health conditions predicted to increase in severity and unanticipated health threats likely to emerge. What changes are needed to prepare our health-care system to deal with the impending climate crisis?

Inslee: There’s not enough doctors or medicine or acupuncture in the world to protect us from the climate crisis. We have to defeat the climate crisis. Any of these measures just try to repair after the car wreck. We need to prevent a car wreck in the first place, and we need a candidate who has a unique commitment to do that. I am that candidate. I’m the only candidate who says this has to be the United States’ top priority. My plan is unique in that it will transition us off coal in 10 years. It’s based on tremendous experience in the state of Washington, passing a 100% clean energy bill. So I’m different than the other candidates. They think we’ve got 30 years to solve this problem. I disagree.

To do what we can to protect ourselves from this, we have to move to a universal health-care plan. We’ve made big strides in my state. I’m proud to be the first governor to lead the adoption of a public health-care option to give the people of my state sanctioned health care. It’s a big step forward for the country, and now we need to move to a “Medicare for all who want it” proposal that I believe is the next big step. We have to reduce the cost of pharmaceuticals by allowing negotiation and reimportation. We have to integrate mental and physical health. And then we have to beef up our public health system that will be responsible for dealing with [climate-related] heatstroke and Lyme disease and increasing infectious diseases to build up our public health infrastructure.

CNBC: Morning Consult says Amazon is Gen Z’s fourth most-loved brand. However, politicians from President Donald Trump to Alexandria Ocasio-Cortez have attacked the brand. Is there a disconnect between leaders and young voters surrounding tech companies?

Inslee: Well, there’s probably a lot of disconnect, including you mentioned the president, who has the largest disconnect in the history of the solar system, and he’s totally disconnected from young voters who demand action against the climate crisis. That’s one of the reasons that I’m running for President of the United States.

As far as tech, what I think we need to look at is behavioral issues. We should not allow low tech, middle tech or high tech to take any abusive actions that are not consistent with our civil rights and our privacy. That’s why I’m pushing a privacy law that will make sure no one violates our privacy, including Amazon or anyone else. We need that privacy law.

I have now passed a net neutrality bill. Net neutrality is necessary to prevent any large, medium or small company abusing our net neutrality, and I think this is something that generation totally understands because the internet is so interwoven in their lives and they realize that we can’t let large corporations interfere with their freedom of speech or their access to innovation. I do believe that it is appropriate to continue to look at some of the antitrust issues that the new internet has brought us, and we need to continue that conversation.

CNBC: A 2018 TD Ameritrade study showed that LGBTQ millennials made, on average, $59,400 a year, while their straight counterparts earned $67,800. Further, only 29% of LGBTQ respondents reported feeling economically secure as opposed to 41% of straight respondents. As president, how will you combat LGBTQ economic inequality?

Inslee: We’d like to attack income inequality for all people. Unfortunately, we have massive income inequality, and that’s why I’m so committed to a progressive tax structure and doing what we’ve done in our state. In Washington we have the highest minimum wage for all people, regardless of their orientation, the best family and medical leave, the highest educator pay increase, the best gender pay-equity protections and some of the earliest and strongest civil rights protections for people in the LGBT community. So the income inequality issue is something we have to be concerned about for everyone.

As far as the LGBT community, I think it would be difficult to find a state that has been more committed and,— on an earlier basis, to assure equity. We allow ourselves to be who we wish to be, marry and love who we wish to marry and love, and protect in employment from any discrimination whatsoever. I’m so proud of my state. I even got to host the first same-sex marriage ceremony in American history in a governor’s residence. It was my cousin. We’ve got a record here in my governorship that will continue in my presidency. We want to make sure that whatever career vision people have, including the military, they can pursue it.

I want to make sure to eliminate Donald Trump’s hate-filled ban on transpeople serving in the United States military. It’s one of the many things we have to do. We also have to increase our protection against hate crimes. I signed a bill this year that protects LGBTQ individuals from hate crimes; it adds a provision to have more serious sanctions. Finally, we have to make sure that we teach antibullying in our public schools. We have been very active teaching children to not allow bias or fear to factor in their relationships.

CNBC: Americans have $1.5 trillion in outstanding college debt. On your website it discusses making college tuition free for low- and middle-income families. What specific measures need to be taken by the federal government to implement such a program?

Inslee: This is a place where we’ve adopted a free college system for low-income folks and assistance for everyone so that everyone can afford a college education, dependent on their financial circumstances. It’s been called a game changer by The New York Times because it is so concentrated to make sure everyone has what they need to afford college without ruinous debt. It was financed not on the backs of working people but by an increase in taxes on big banks and big tech companies. I think that was the right way to finance this. So the first order of business is to prevent debt from having to be accumulated.

CNBC: Gallup says that 4 in 10 Americans embrace some form of socialism. Do you think this is a realistic vision for the future of the American economy?

Inslee: I don’t think we should waste a lot of time arguing about what ideological label to use, but I will tell you I’m committed No. 1 to fairness in our economic system that we do not have today. We can have that by adopting the things we’ve done in the state of Washington, including reinvigorating the union movement. I was the only one that brought up the union movement at the last debate, because I recognize how we have to restore the ability of people to get pay raises and benefit raises by having the protection of a union.

So I don’t worry about labels. I worry about productivity and progressive values. What we’ve done in my state is we have shown that when you embrace progressive values based on diversity as a virtue rather than a vice, when you’re aggressive, when you adopt progressive measures to deal with income inequality and when you adopt measures that recognize people — like I did when I stood up against the Muslim ban and they said we should accept Syrian refugees — you get the best economy in the United States.

Washington State is a template for growing a successful economy in the United States. I’m happy to defeat Donald Trump by showing that his trickle-down economics, whatever you call them, are not the route forward for the growth of the American character, family or individuals.

“To me, photography is an art of observation. It’s about finding something interesting in an ordinary place… I’ve found it has little to do with the things you see and everything to do with the way you see them.” — Elliott Erwitt – Visit The Online Publishers TOP online photographers for inspiring, professional photography.

3 Benefits To Going With TOP for Press Release Distribution.

3 Reasons To Check Out the TOP Photo Gallery.

3 Reasons That TOP Platform Is The Best Ebooks Hub.

Buying Unique Photos Online From A Photos Gallery Through TOP.

Where You Can Find Ebooks To Read And Buy.

3 Reasons to Opt with TOP for Online Reputation Management Solutions.

4 Reasons TOP is The Best Option For Online Reputation Repair.

How TOP Helps When You Need To Know How To Repair A Bad Reputation.