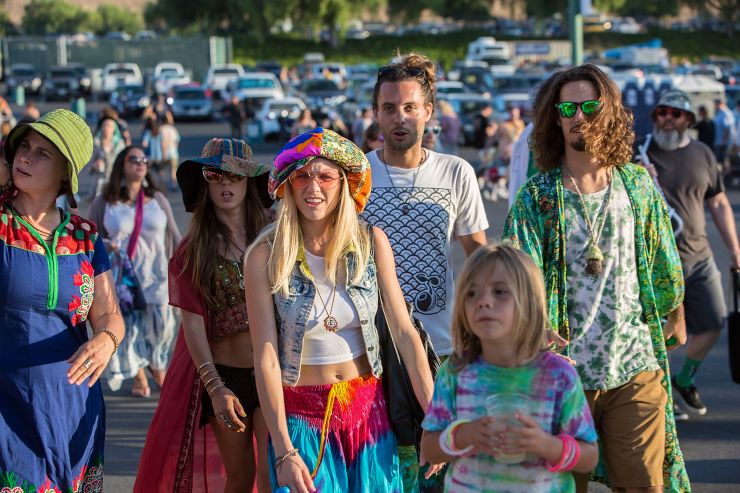 Ariana Grande’s “Sweetener” tour, which began in March, is already breaking records — at least for registering new voters ahead of the 2020 presidential election.

Grande announced she would be partnering with non-profit voter registration group HeadCount in March via Instagram, telling fans to “use your voice and get your ‘thank u, next gen’ sticker.”

Her message appears to be getting through.

HeadCount, which partners with musicians to register voters at concerts, has signed up just over 17,000 voters so far this year, more than any other year before a presidential election.

“People are really excited to vote in the next election,” said Andy Bernstein, executive director at HeadCount. “It’s very clear that people are kind of waking up.”

At the Bonnaroo music festival in Manchester, Tennessee, last month, HeadCount registered 1,390 attendees, more people than it has ever registered at a single event.

“The musicians from all genres have often chosen to use their platforms to express their political beliefs or organize their fans around causes that are important to them,” said Laura Sohn, Bonnaroo’s director of sustainability who manages the festival’s social impact projects. “People just seem so much more engaged this year.”

Bernstein said Bonnaroo attendees told organizers they were particularly motivated to vote due to politics in southern states, including the passing of restrictive abortion laws.

The polarizing political climate shaping up for next year’s presidential election is also driving voter registration for Rock the Vote, which was founded in 1990 to combat censorship in music. It registers young people at college campuses, online and elsewhere.

“Rock the Vote has processed almost 60% more registrations this year than it did by this time in 2015, which holds the record for registrations for a year leading up to a presidential election,” President and Executive Director Carolyn DeWitt told CNBC. “I fully suspect we will shatter that record this year.”

Grande’s “Sweetener” tour is the the most successful single artist tour HeadCount has seen since 2008, when former President Barack Obama was running and Jack Johnson’s summer tour set the organization’s record. HeadCount said it’s registered twice as many voters during “Sweetener” as any other tour over the last three years — and there’s still almost six months left to Grande’s performances.

Bernstein noted that numbers in recent years may have not been as high as before 2008 as some states now offer online voting registration, declining to say exactly how many voters it has registered at Grande’s concerts.

Rob Watson, the director of student programs at the Harvard Kennedy School’s Institute of Politics, said registering voters at events is important, but it doesn’t have the biggest impact on voter engagement.

“The research says that the most powerful effect for engagement is peer-to-peer,” Watson said. “It’s one thing to say at a school or classroom or a concert, ‘we want you to vote,’ but it’s another to have someone close to you push you.”

He added that technologies are emerging that facilitate this type of engagement by allowing users to nudge their friends and family members to register via text message.

But it’s not just about registration.

“This is a voter turnout game first,” said Kamari Guthrie, director of communications at Vote.org, an online voter registration service. “It’s not about registration, it’s about turnout.”

Therefore, she said, it’s important for organizations to engage voters after they register, including sending reminders of when to take time off to vote and where to find polls.

Guthrie said celebrities can convince young people to register to vote, especially if they appeal directly to their fans. In October 2018, voter registration shot up after singer Taylor Swift urged her followers on Instagram to vote. In the week after the post, Vote.Org saw over 192,000 registrations from voters aged 18 to 24, compared with around 88,000 for roughly the same time period in October 2016.

Grande fans have been using the hashtag #thankunextgen – a play off of Grande’s popular song “thank u, next” – in social media posts to indicate that they registered to vote at her concert. Representatives for Grande declined to comment for this story.

The 2018 midterm elections drew more voters than any other non–presidential year since 1978, Pew Research Center found in an analysis of Census Bureau Data. It also drew more younger people, as the three youngest generations of voters — Gen X, millennials and Gen Y — outvoted baby boomers for just the second election in history. The first was the 2016 presidential election, according to Pew.

More than half of the votes during the midterm elections last year, 62.2 million of them, were cast by people under the age of 54, compared with 60.1 million votes cast by baby boomers and older generations, according to Pew. Gen Z, ages 7 to 22 in 2019, and millennials, ages 23 to 38 in 2019, reported casting a quarter of the total votes.

The analysis noted that Gen Z’s impact will likely be felt more in the 2020 presidential election, as the members are just starting to reach voting age. HeadCount’s numbers are reflecting this as well: about three-quarters of HeadCount’s newest registrations are in the 18-to-25 age range.

HeadCount has registered about 500,000 voters since 2004, the non-partisan organization said, and has worked with artists including Jay-Z, Dave Matthews, Pearl Jam and members of The Grateful Dead. Musicians, concert promoters and volunteers work together to register voters when participating artists perform live in major cities. Bernstein said about one-third of the funding comes from artists and artist-related initiatives.

“The artists are very supportive of what we do,” Bernstein said.

Want To Start Selling Your Photos Online? Here Are the Steps to Follow.

Get Started With Earning For Posting On Social Media. To more click >>> Theinternationalcampaigner

Sell Photos In One Photos Gallery Through TOP.

Easier For Writers To Earn With TOP Platform

Why TOP Is Your Best Shot For Online Reputation Repair.

3 Reasons To Register To Review With TOP.

3 Steps To Getting Great Online Reviews.

If Facebook and Google don’t fix their problems, advertising execs say they could go somewhere else.

US inflation picks up in April as spending slows.

Australia’s Richest 2019: In A Down Year, Two Miners Break Back Into The Top 50.

Trump’s tax overhaul is taking a serious toll on the Hamptons real-estate market.

Why is the Brecon by-election so important to Boris?.

Millions In India Face Uncertain Future After Being Left Off Citizenship List.