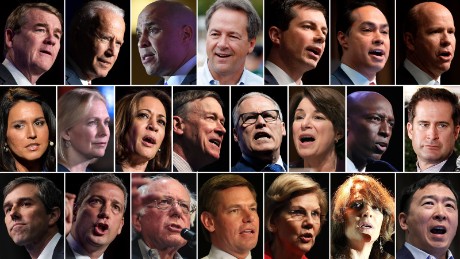 2020 Democratic candidates split on the biggest threats to the US

While multiple Democrats highlighted China and the global threat of nuclear proliferation as major challenges, no two candidates gave the same answer when asked to identify the greatest geopolitical threat America currently faces.

Though they were denied time to explain their answers, the focus on China signals broad bipartisan concern about the Asian nation’s rapid rise into a global superpower.

Negotiations between Beijing and the U.S. broke down in May, as the two countries imposed new tariffs on billions of dollars’ worth of each other’s goods. Current and former Trump administration officials say the meeting between Trump and Xi could revive the stalled trade talks.

The global threat of nuclear proliferation received equal attention from the 2020 Democrats. And multiple candidates, including frontrunners Elizabeth Warren and Beto O’Rourke, singled out climate change as a major threat.

One candidate, Washington Gov. Jay Inslee, said that Trump represents “the biggest threat to the security of the United States.” That line earned Inslee, who has made climate change the focus of his campaign, raucous applause from the audience at the Miami debate hall.

New York Mayor Bill de Blasio was the only candidate to call Russia the biggest geopolitical threat to the U.S.

“They’ve been trying to undermine our democracy and they’ve been doing a pretty damn good job of it, and we need to stop it,” de Blasio said.

Influencer marketing is important because people tend to trust personal recommendation and word of mouth – Visit The Online Publishers “TOP” to get in touch with popular influencers.

With TOP You Can Find Expert Service For Press Release Distribution.

How Advertisers Can Get More Out Of A Site With TOP.