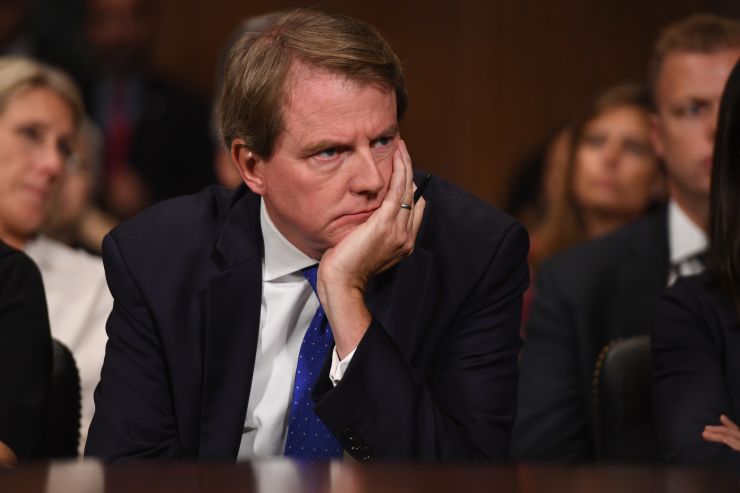 President Donald Trump on Monday directed former White House counsel Don McGahn not to comply with a subpoena to testify about special counsel Robert Mueller’s Russia report, intensifying a clash between the Trump administration and the House Democrats who subpoenaed McGahn to appear.

In a 15-page legal memo from the Department of Justice and a separate letter to House Judiciary Committee Chairman Jerrold Nadler, D-N.Y., legal officials in the Trump administration argued that McGahn is “absolutely immune” under the law from being compelled to testify.

“Because of this constitutional immunity, and in order to protect the prerogatives of the Office of the Presidency, the President has directed Mr. McGahn not to appear at the Committee’s scheduled hearing,” Trump’s counsel, Pat Cipollone, wrote in the letter to Nadler.

McGahn, who was scheduled to testify Tuesday morning, is cited more than any other witness in Mueller’s report on Russian election meddling, possible conspiracy between the Kremlin and the Trump campaign, and possible obstruction by Trump himself. He was subpoenaed in late April by the House Judiciary Committee to appear before that panel and answer questions, as well as hand over a slew of documents.

“Congress may not constitutionally compel the president’s senior advisors to testify about their official duties,” Assistant Attorney General Steven Engel wrote in the legal opinion.

The Judiciary Committee had received Cipollone’s letter Monday, a committee source told NBC News. But McGahn’s legal team had not notified the panel about whether he would or would not appear. The committee still planned to hold a hearing at 10 a.m. ET, the source told NBC.

Trump signaled in early May that he would likely stop McGahn from testifying.

“Well, I’ve had him testifying already for 30 hours” with Mueller’s team, Trump said of McGahn in a Fox News interview. “I don’t think I can let him and then tell everybody else you can.”

“This action has been taken in order to ensure that future Presidents can effectively execute the responsibilities of the Office of the Presidency,” Sanders said.

In a statement Monday afternoon, Nadler said Trump’s instruction “is just the latest act of obstruction from the White House that includes its blanket refusal to cooperate with this Committee. It is also the latest example of this Administration’s disdain for law.”

In his letter to Nadler, Cipollone wrote that there is “no question” that McGahn’s former position as White House counsel “falls within the scope of immunity,” meaning he cannot be compelled to testify by Congress. Cipollone further argued that that protection can still be applied to McGahn, even though he left the White House last October.

The subpoena against McGahn came days after the public release of a redacted version of Mueller’s long-awaited report. The 448-page report did not find sufficient evidence to a show a conspiracy between the Trump campaign and the Kremlin — though it did show multiple figures in Trump’s orbit willing to accept Russian help in the 2016 election.

The report made no conclusion about whether Trump obstructed justice; that decision was taken up by Attorney General William Barr and then-Deputy Attorney General Rod Rosenstein, who determined that the report did not show enough evidence to support an obstruction offense.

Nadler had previously threatened to hold McGahn in contempt if he failed to comply with the subpoena. Weeks earlier, Nadler’s committee voted to hold Barr in contempt for defying the panel’s subpoena for the full, unredacted Mueller report and its underlying evidence. Barr refused, arguing that he cannot by law release certain sections of the report, including grand jury information, to the public.

Trump has vowed to fight “all the subpoenas” that have been lodged by Democrats since they took majority control of the House and its committees after the November midterm elections. Democrats in Congress have lodged dozens of requests for information, documents or cooperation from the White House and a slew of Trump’s associates.

The Democrats argue that they are exercising their constitutional oversight duties to hold the president accountable. Trump and his Republican supporters, however, accuse Democrats of engaging in a wide-ranging fishing expedition to dig up dirt on the president and bolster an eventual case for his impeachment.

“What better way to ensure we don’t hear from McGahn this week than by subpoenaing a witness who’s categorically immune from testifying?” Collins asked rhetorically.

Best Way To Sell Photos From Home For Cash.

TOP Gives A New Opportunity To Earn With Its Ebooks Library.

Trust TOP To Help Repair Your Online Reputation At Any Time.

One Quick Way To Take Care Of Online Reviews.

2 Benefits You Get When Partnering With TOP For Online Reputation Building.

2 Benefits To Getting Reviews Through TOP.

One Reason You Should Partner With TOP Today. To more >>> online translators platform.

3 Reasons Why You Should Trust TOP For Finding Translation Services.

The Importance of Online Translation Sites.

How to attract Foreign Direct Investments (FDI) in a country.

How To Find The Right Influencer.

Canada expects a 40 per cent increase in citizenship among immigrants by 2024 .