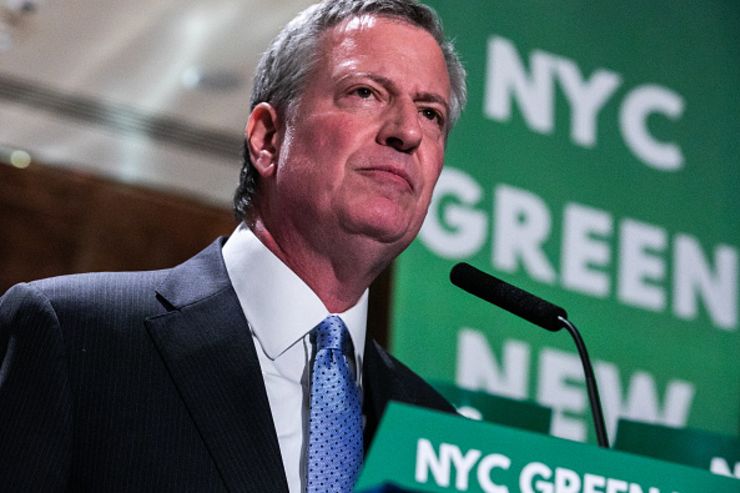 Posted By: Editorial Teamon: May 16, 2019In: Elections, People, PollsNo Comments
Print Email
Mayor Bill de Blasio officially entered the 2020 race for president Thursday morning, vowing to make his campaign a battle against corporations and the wealthy — especially fellow New Yorker Donald Trump.
In an announcement video, de Blasio touted his familiarity with the president: “I know how to take him on.”
“Donald Trump must be stopped,” he added.

Trump did not waste much time in ripping de Blasio’s candidacy. “He is a JOKE,” the president tweeted Thursday morning.
After the announcement, de Blasio travels to Iowa and South Carolina for multiple stops over the course of four days, NBC News reported Wednesday.
De Blasio, 58, has faced more resistance to his presidential aspirations — including from his own constituents — than nearly any other Democrat in the race.
Recent polls from Quinnipiac University show the mayor’s approval rating underwater in New York City, and 76% of New Yorkers told the pollster in April that de Blasio should not run for president. De Blasio’s staunchly progressive rhetoric appears to have turned off New York Republicans: 70% of them disapproved of their mayor, according to Quinnipiac’s April poll.
He is not particularly popular in early surveys of Iowa and New Hampshire either.
Nevertheless, de Blasio took a number of steps signaling his intention to run for the White House. The New York Times reported that de Blasio traveled to battleground states, held pricey donor events and spoke at high-profile political conferences.
Allies of de Blasio argue that he has similar, or more, executive experience compared with other 2020 candidates, according to NBC.
“Because he has such a present press corps in a tabloid city, we’ve seen him up close and in an aggressive and unflattering light, but if you look at his actual record of achievement, it’s quite lengthy,” Rebecca Katz, a Democratic strategist and former top de Blasio aide, told NBC. “Yes, there’s an argument to be made about whether he should be running for president or not, but he is certainly qualified.”
New York City has an estimated 8.6 million residents, giving it a larger population than 38 states, including Washington, Colorado and Montana — governors and former governors of which are also running for president.
His entry makes him only the latest in a sea of nearly two dozen Democrats vying to take on Trump. Former Vice President Joe Biden took an early and commanding lead in opinion polls when he announced in late April, while Sen. Bernie Sanders, I-Vt.; South Bend, Indiana, Mayor Pete Buttigieg; and Sen. Elizabeth Warren, D-Mass., have remained competitive at the top of the pack.
As mayor of a metropolis that reliably votes Democratic in presidential elections, de Blasio has taken a hard line against Trump on multiple fronts. On Monday, de Blasio staged a campaign rally-style news conference inside Manhattan’s Trump Tower.
The event was intended to criticize the Trump administration’s handling of environmental issues and advocate for an “NYC Green New Deal,” but was marred by loud music blasted from lobby speakers and hecklers holding up signs that read “Worst Mayor Ever.”
De Blasio’s announcement comes shortly before the first Democratic primary debates in June and July. The Democratic National Committee says a maximum of 20 candidates will be able to qualify for those debates, based on polls and donor numbers. With so many candidates already tentatively cleared to participate, de Blasio may face an uphill battle trying to secure a spot on the stage.

An Opportunity With TOP Ebooks Library To Start Earning

Why You Should Trust TOP For All Reputation Management Needs.

4 Main Reasons To Do Online Reviewer Work With TOP.

4 Reasons To Go With TOP For Content Creation Services

3 Steps To Getting Great Online Reviews.

Norway to allow dual citizenship from 2020.