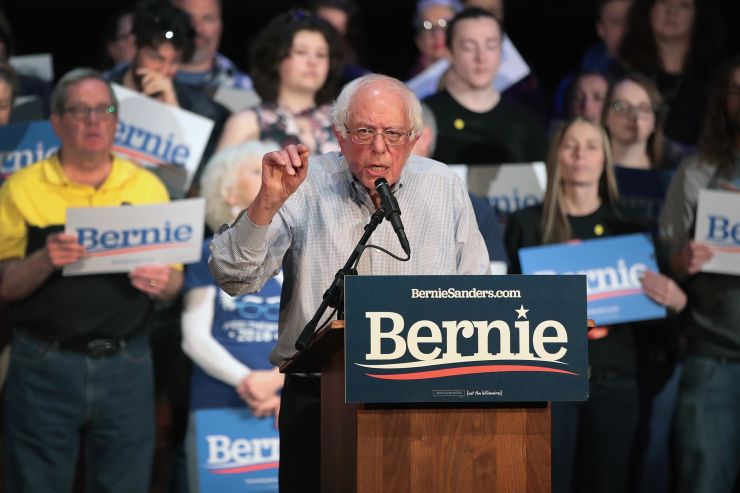 That’s only the start of the intrigue in Iowa ahead of the 2020 elections. Even for a presidential campaign staging ground and White House swing state, the Hawkeye State will play a massive role next year.

“Iowa is always important, but it really will be the center of the political universe for much of 2020,” said Alex Conant, a Republican strategist who worked on first-term Sen. Joni Ernst’s 2014 campaign victory.

All four of the state’s House districts have a chance to change hands as Democrats try to hold a majority they won last year in part through a strong showing in Iowa. Meanwhile, Republicans may need Ernst to hold her seat to keep their Senate majority.

Trump looms above it all. The president won Iowa by about 10 percentage points in 2016 after President Barack Obama carried the state twice. But frustrations have started to boil in a state heavily reliant on exports to Canada and Mexico. The president’s tariff policy and struggle to ratify updates to the North American Free Trade Agreement have created uncertainty for farms and other businesses.

Of course, most of the focus on Iowa relates to its February caucuses, the first nominating contest in the Democratic presidential primary. The more than 20 candidates in the primary field have descended on the state in recent months, standing on counters, eating ice cream and serving beer as they court the state’s voters. A strong showing there can help Democrats establish an early foothold in the race to challenge Trump for the White House. 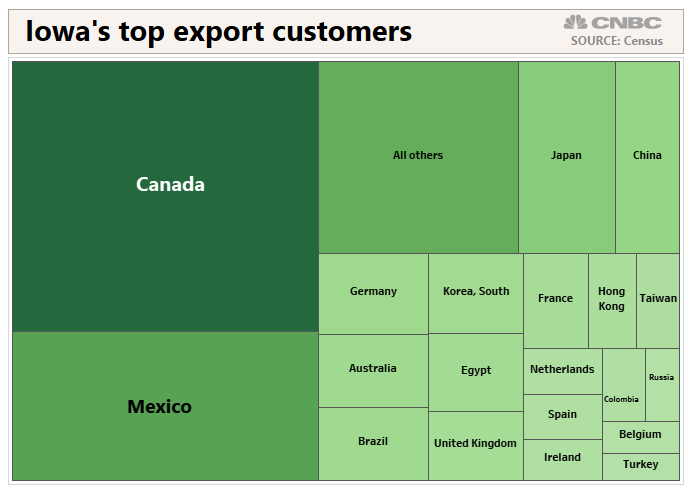 There’s more than a presidential race in Iowa

But much more will happen in Iowa to shape the battle for control of the White House and Congress in 2020. Along with states such as Pennsylvania and Michigan, Iowa voted for Trump after backing Obama twice. All of those states swung toward Democrats in last year’s midterms: in Iowa, Reps. Abby Finkenauer and Cindy Axne flipped GOP-held seats, while Republican Gov. Kim Reynolds won reelection by only about 2.5 percentage points.

Iowa will play a major role in House elections again next year. Republicans have their eyes on taking back both Finkenauer’s 1st District and Axne’s 3rd District. The GOP will also target the state’s 2nd District, which despite its blue tilt has entered the 2020 battlefield due to Democratic Rep. Dave Loebsack’s retirement.

Meanwhile, Republican Rep. Steve King in Iowa’s 4th District will have to fight off primary and general election challenges next year after surviving a close call in 2018. King, who has served for more than 15 years, lost party support and was stripped of committee assignments because of racist comments. His leading GOP rival for the seat is state Sen. Randy Feenstra, who easily raised more money than King in the first quarter.

King’s district is “so heavily Republican that it really hasn’t been competitive for quite a while,” said Tim Hagle, an associate professor of political science at the University of Iowa. He said it has a better chance of flipping to Democratic control if King wins the nomination over one of his Republican challengers.

Combined with Loebsack’s retirement and the freshman Democrats’ defense of their seats, the state has more congressional ballot intrigue than it has in years.

At the statewide level, Ernst has an early advantage in the race to keep her seat. She won by nearly 10 percentage points in 2014. Democrats have struggled to find a top-tier challenger to take her on — both former Iowa Gov. Tom Vilsack and Axne declined to run for Senate.

Still, the factors that could make Trump’s reelection close in Iowa will also affect Ernst.

Iowa sits at the center of two national issues that will test voters’ patience not only for the president but also other incumbents. Farmers damaged by lower prices caused in part by Trump’s trade war with China want to see the conflict end and hope Congress will approve the new United States Mexico Canada Agreement.

Lindsay Greiner, president of the Iowa Soybean Association, said “there’s really bean a lack of any good news.” The organization advocates for soybean farmers in Iowa, the largest U.S. producer of the crop. Prices have plunged since the U.S. started a tit-for-tat tariff battle with China. The Trump administration has pushed Beijing to purchase more soybeans as part of any agreement.

“Politicians are dragging their feet on approving USMCA. Progress has been made on a deal with China but it’s been slow,” Greiner said, referring to the updated NAFTA, which Trump has dubbed the United States Mexico Canada Agreement. He added that politicians appear “more concerned about whether Russia meddled in an election when there’s real economic hardship going on in farm country.”

Greiner grows about 800 acres of corn and 700 acres of soybeans near Keota, Iowa. He said he has looked for ways to cut costs as the revenue for his farm has dropped by about $80,000 in the last year.

The prospects look grim for USMCA approval soon. The majority House Democrats are in no hurry to bring the deal to a vote in the chamber. Republicans, led by Senate Finance Committee Chairman Chuck Grassley-R-Iowa, and Ernst, have pushed Trump to drop tariffs and steel and aluminum imports from Canada and Mexico before moving forward with the agreement.

Iowa relies on America’s northern and southern neighbors. It sent $4.2 billion in goods, or about 30 percent of its exports, to Canada in 2018, according to the U.S. Trade Representative. It exported $2.3 billion in goods to Mexico. 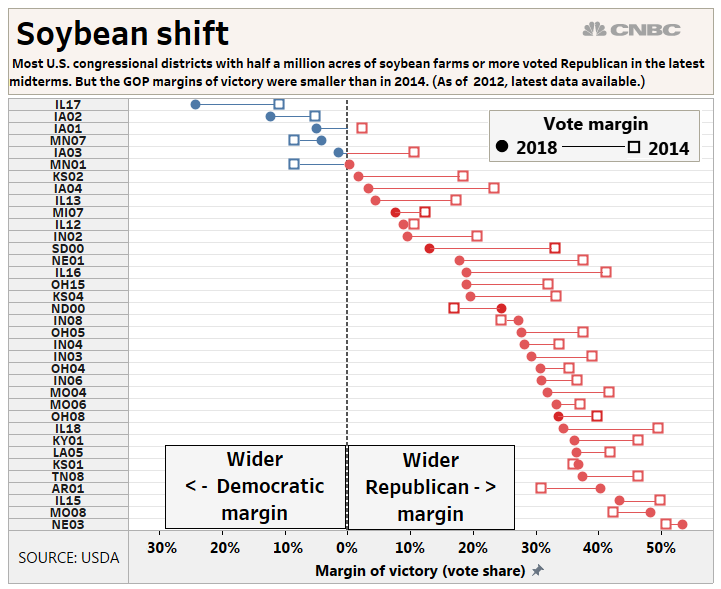 With about 18 months until the election and a Democratic nominee to be determined, it will take a while before we know whether the trade conflicts hurt Trump’s reelection. Greiner has voted for candidates from both major parties and supported both Trump and Loebsack in 2016.

He said it is “too soon to tell” whether he will vote for a second term for the president.

Trade has implications for Iowa’s House races, too. All four of Iowa’s congressional districts are among the 36 that have soybean plantings of more than half a million acres. Both Finkenauer and Axne criticized Trump’s tariffs on China on the way to winning their seats. While King acknowledged the damage the trade war caused to Iowa farmers, he, along with Trump, has stressed patience.

Farmers in western Iowa already ravaged by trade conflict took another devastating blow earlier this year. The worst flooding in years hit the state, along with Nebraska and Missouri. It put a focus not only on climate change but also the integrity of U.S. infrastructure.

With the issues facing Iowa, Democrats have looked for ways to gain an edge in 2020. Sen. Elizabeth Warren, D-Mass., proposed appointing “trustbusters” to review and reverse “anti-competitive mergers” in the agriculture industry. Sen. Amy Klobuchar, a Minnesota Democrat used to campaigning in farm country, has put an emphasis on overhauling infrastructure and connecting rural Americans to the internet.

Multiple Democratic candidates have toured the flooded areas of Iowa. Washington Gov. Jay Inslee — who has run primarily on a pledge to combat climate change — used the moment to accuse Trump of making natural disasters worse by failing to address a warming planet.

In only the last few days, the eastern part of Iowa took a hit. Flood waters swept into Davenport, Iowa, on Tuesday temporary structures holding back a swollen Mississippi River gave way. Warren cited Davenport on Thursday in saying “climate change is here, and it’s up to us to act.”

But Iowa carries its pitfalls for Democrats. The Senate has failed to pass a bill to send natural disaster relief funds to states such as Iowa, Florida, Texas and California. Democrats have pushed for a package to include more aid for hurricane-ravaged Puerto Rico — spending Trump does not support.

All six senators running for president as Democrats either voted not to advance, or missed the vote on, a GOP-backed bill that they said lacked enough relief money for the island commonwealth. When the vote took place last month, Grassley warned his colleagues about political backlash in Iowa.

“To my colleagues across the aisle who have been spending a lot of time in Iowa lately as presidential candidates, if you vote against moving forward with the [relief money for Midwestern states], how are you going to look Iowans in the eye and justify a vote against moving this disaster relief bill ahead?” he asked at the time.

Trade poses another issue for parts of the Democratic field in Iowa. Leading candidates whose trade views overlap with Trump’s — such as Sen. Bernie Sanders, I-Vt., and Warren — will have to defend their opposition to trade deals such as NAFTA that have shaped the Iowa economy.

“We do want to have an end in sight”

Though trade is a thorny issue for some Democrats, the party’s eventual nominee will likely use it against Trump if the pain for farmers drags into next year.

“I would think that the potential is it’s a real problem for the Trump campaign,” the University of Iowa’s Hagle said. “I think a lot of farmers are uneasy about the situation.”

Thiele manages hog barns and plants soybeans and corn. Last year, he abandoned plans to build a new barn — in part because of higher steel prices driven by tariffs. He decided not to plant soybeans this year because of low crop prices.

He said “there’s no doubt about it, there’s frustrations today” about trade policy. Thiele said he has “a feeling that some are going to be losing interest” in supporting Trump.

Asked whether he would vote for the president again, Thiele responded, “I hope so.” His support will depend in part on whether Trump can resolve trade disputes.

The president has repeatedly said farmers will stick with him through the trade disputes because they will be better off when he strikes new deals. Trump has called them “great patriots” who “understand that they’re doing this for the country.”

He continued: “We are patriots. We do like seeing things through to the end. But we do want to have an end in sight. We need to be able to survive the short term to make it to the long term.”

Their city lacks public spaces for protests, so Beirut residents made their own.