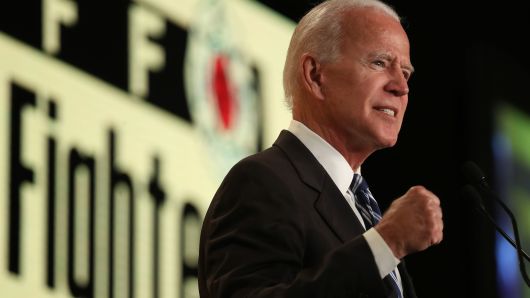 Former Vice President Joe Biden is guaranteed to shake up an already crowded field of Democratic presidential primary contenders that includes at least half a dozen senators and a host of other viable candidates.

Biden, 76, starts out the race to take on President Donald Trump as the favorite among Democratic voters, consistently taking the top spot in early polling.

Biden, the former chairman of the Senate Foreign Relations Committee and vice president under President Barack Obama, enters the fray with a half-century of experience in government — a far longer record than many of those he will be competing against.

His experience, name recognition and connections on the national stage are likely to boost his ability to organize on the ground, a key hurdle in the crowded field. But his moderate public positioning, forged in the decades before the Democratic Party moved decisively left, is expected to face fresh scrutiny by an energized progressive base.

The former vice president also enters the race after several women have come forward alleging that Biden has touched them in ways that made them feel uncomfortable. In response, Biden pledged to be “more mindful and respectful of people’s personal space,” though he also later joked about the accusations.

Biden took his time deciding whether to enter into the race at all.

The former senator from Delaware waged bids for president twice before, including in the 2008 race in which he was eventually named Obama’s running mate.

Biden plans to resurrect some of his proposals from earlier bids, according to NBC News. In particular, Biden contemplated a $15 minimum wage proposal, higher taxes on investment income, no tuition for students at public colleges and universities, and a major infrastructure overhaul.

Infrastructure could be an important pillar of Biden’s campaign, CNBC reported in March. At the time, Biden and his advisors were still examining proposals made by other candidates and had not yet formulated a 2020 platform.

The biggest obstacle Biden could face in winning the Democratic nomination could be his record as a senator.

Then, Biden was a strong supporter of the banking industry and was particularly cozy with MBNA, one of his top donors, which has since been acquired by Bank of America.

Biden is also likely to face scrutiny over his advocacy for capital punishment, his stewardship of a sweeping 1994 crime bill that experts say contributed to a new era of mass incarceration, and his support for the invasion of Iraq in 2003. Biden also voted in favor of the Defense of Marriage Act, which discriminated against same-sex couples.

Biden has largely moved to the left along with the party and has said some of his previous positions were mistakes, although those votes will likely still be used against him.

The former senator will also face renewed criticism over his handling of sexual harassment allegations made by Anita Hill against Clarence Thomas during the latter’s Supreme Court confirmation hearings. The issue took on new fervor last year amid accusations against Brett Kavanaugh before he was confirmed to the high court.

Biden has been blamed for enabling the attacks on Hill, and for failing to call witnesses who would have supported her testimony. He has since apologized for his handling of the hearings.