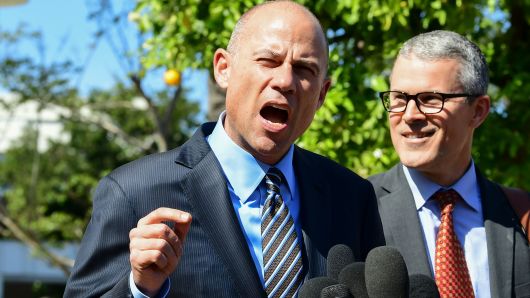 Celebrity lawyer Michael Avenatti was slammed Thursday with a 36-count indictment by a federal grand jury in Los Angeles that accuses him of ripping off clients — including a mentally ill paraplegic — tax crimes, wire fraud, bank fraud, and perjury.

The indictment, scheduled to be discussed at a press conference in Los Angeles at 9 a.m. PT, comes more than two weeks after federal prosecutors in Los Angeles and New York hit Avenatti with separate criminal complaints.

In the case in New York, Avenatti is accused of trying to extort up to $25 million from athletic shoe giant Nike by threatening to expose alleged bribery of amateur basketball players and their families unless the company coughed up cash to Avenatti and a client.

The new, 61-page Los Angeles indictment alleges that Avenatti for years hid and then completely spent a $4 million legal settlement obtained in January 2015 in favor of a mentally ill paraplegic client, and hid a $2.75 million settlement for another client that Aventatti allegedly used to help pay for the purchase of a private jet.

Most of the money for the paraplegic client allegedly was funnelled to a company that managed Avenatti’s race-car team, and to his coffee company, Global Baristas, which operated the Tully’s chain.

The indictment says that because Avenatti failed to respond to the U.S. Social Security Adminstration’s request for information about the paraplegic, that client had his Supplemental Security Income benefits discontinued in February.

In all, five clients were allegedly ripped off for millions of dollars by Avenatti, who also is accused of using shell companies and other means to hide the purported thefts.

The indictment said that in some cases, such as with the paraplegic, Avenatti would give a client funds which he claimed were “advances” on the “the purportedly yet-to-be received settlement proceeds.”

Avenatti also is accused in the indictment of taking almost $2.4 million in taxes withheld from the paychecks of workers at Global Baristas,

And the indictment says that the last time he filed his federal income tax return was in 2011 for the 2010 filing year.

Prosecutors in L.A. accused him in their prior complaint of defrauding a legal client by looting a $1.6 million civil settlement for that man to pay for Avenatti’s personal and business expenses.

He was also accused in that case of defrauding a Mississippi bank by using bogus federal income tax returns to apply for and receive $4 million in loans.

The indictment planned to be discussed Thursday has 34 more criminal charges against Avenatti than the two felony counts that prosecutors in Los Angeles lodged against Avenatti on March 25: bank fraud and wire fraud.

On Wednesday, federal authorities reportedly seized the private jet co-owned by Avenatti, valued at about $4.5 million, in connection with the investigation in Los Angeles.

Reached for comment, Avenatti told CNBC in a text message, “For 20 years I have represented Davids vs. Goliaths and relied on due process and our system of justice.”

“Along the way, I have made many powerful enemies. I am entitled to a FULL presumption of innocence and am confident that justice will be done once ALL of the facts are known,” Avenatti added.

In a tweet, Avenatti said, “I intend to fully fight all charges and plead NOT GUILTY. I look forward to the entire truth being known as opposed to a one-sided version meant to sideline me.”

Avenatti is free on $300,000 bail. It is not yet known when he will appear in U.S. District Court in Los Angeles for his first hearing on the new charges in the indictment.

As with the Los Angeles case, Avenatti is expected to be indicted by a grand jury in the New York case. Unless defendants in federal criminal cases agree to plead guilty, prosecutors have to obtain a grand jury indictment to push a case toward trial after filing a complaint.

Avenatti told CNBC’s “Closing Bell” on Monday that Nike “pulled a stunt” by having him arrested in New York before he could go public with his claims that the company was bribing high school hoop players to coax them into attending Nike-sponsored colleges.

Avenatti told CNBC that Nike “has been covering up this scandal for over five years.”

“They knew they could not control me. … They effectively had to shoot the messenger.”

Daniels was paid $130,000 by Cohen on the eve of the 2016 presidential election in exchange for her agreement to keep quiet about what she has said was a one-time sexual tryst with Trump a decade before. Trump denies having sex with her.

Cohen last year pleaded guilty to multiple federal crimes, including campaign finance violations related to his facilitating the payment to Daniels, and to a hush money deal paid by The National Enquirer to another self-admitted Trump paramour, Playboy model Karen McDougal. Trump likewise denies McDougal’s claim of an affair.

Cohen is set to begin serving a three-year prison term next month.

When he was arrested on March 25, Daniels released a statement saying, “Knowing what I know now about Michael, I’m saddened but not shocked regarding his arrest.”

“I made the decision weeks ago to terminate Michael’s services after discovering that he had dealt with me extremely dishonestly, and I will have my own announcement coming soon.”

Read the indictment against Michael Avenatti: