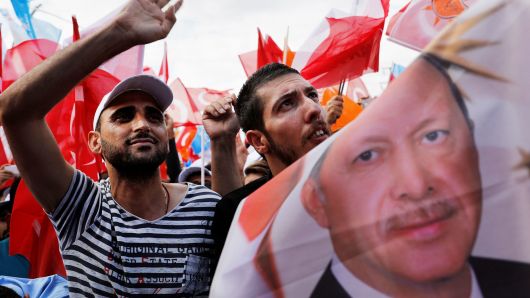 Turkey’s move to prop up the lira before elections hurt its credit standing: Moody’s

Ahead of the weekend’s crucial elections, Turkey’s central bank used its reserves to prop up the lira, renewing questions on its independence, said Moody’s Ratings Agency which rated the country “credit negative” on Monday.

“The fall in reserves suggests that the central bank had been intervening in the local foreign exchange market to prop up the lira ahead of municipal elections,” said Moody’s Ratings Agency in a report on Monday.

That comes as a dramatic election in the country took place on Sunday, when Turkey’s President Tayyip Erdogan apparently suffered a severe setback as his ruling AK Party lost control of the capital Ankara for the first time in local polls after 25 years in power.

Turkish broadcasters said opposition Republican People’s Party (CHP) candidate Mansur Yavas had won a clear victory in Ankara, but the vote count in Istanbul was so tight that both parties declared the narrowest of victories.

The embattled lira, which crashed to record lows last year due to domestic economy woes, fell as much as 5 percent to 5.569 against the dollar last Thursday.

The lira remained weakened, trading at 5.61 to the dollar as results came in, before settling at levels above 5.57 on Monday.

The ratings agency said the move to tap on reserves before the elections raised questions about the transparency of Turkey’s institutions as a whole. That comes after questions about the Turkish central bank’s independence were raised last year, after Erdogan pressured the bank to hold rates down in favor of pursuing growth.

“(The) intervention to support the lira is contrary to the central bank’s longstanding policy to allow the exchange rate to float freely and poses renewed questions about the transparency and independence of the central bank, and by extension of Turkey’s broader institutional framework,” the report said.

In addition to the lira stumble, Turkey’s markets also fell. The Istanbul stock exchange index plunged more than 12 percent — at its lowest point on Wednesday — from a week earlier, Moody’s noted in its report.

“Renewed turmoil in the Turkish financial markets and heightened uncertainty regarding the policy reaction to the ongoing recession raise the risk of further capital flight,” the agency concluded, adding that the election results will likely determine if the shock to markets would persist.

Publish your press release through the online publishers