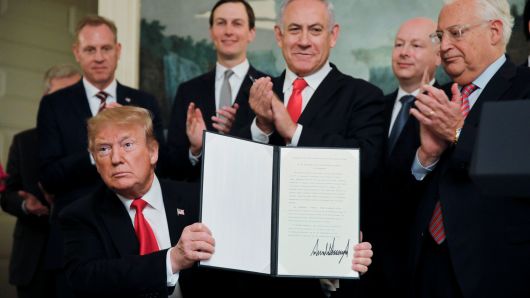 President Donald Trump added a new notch to his belt of shock foreign policy moves Monday night, signing a proclamation officially recognizing Israel’s annexation of the Golan Heights, which it captured from Syria in 1967 and has occupied ever since.

Trump initially announced the policy about-face last week via Twitter, writing: “After 52 years it is time for the United States to fully recognize Israel’s Sovereignty over the Golan Heights, which is of critical strategic and security importance to the State of Israel and Regional Stability!”

The decision is major in a few ways. It’s yet another rejection by the Trump administration of decades of U.S. policy; it recognizes Israeli sovereignty over a territory internationally recognized as belonging to an Arab state; and it’s seen as a boost to Israeli Prime Minister Benjamin Netanyahu ahead of Israel’s elections.

Uriel Sinai | Getty Images News | Getty Images
Israeli Merkava tanks participate in a drill near the border with Syria at the Israeli-annexed Golan Heights on May 6, 2013.

In addition, some are calling it a double standard when it comes to the U.S. response to Russia’s annexation of Ukraine’s Crimean peninsula.

“American recognition of the annexation would contravene international law,” Ian Bremmer, founder and CEO of risk consultancy Eurasia Group, wrote in an email note this week.

“It would be used by the Russians to legitimize their annexation of Crimea,” he added. “Plus, it would make movement on the peace plan considerably more awkward.”

The US stands alone

The signing, which took place in the White House with Netanyahu present, makes the U.S. the only country in the world besides Israel to recognize the annexed territory, which comprises the western two-thirds of the Golan.

Netanyahu called it “historic” while Syria labeled it a “blatant attack on its sovereignty” and pledged to take the territory back by “all available means.” Turkey’s Erdogan pledged to take action against the U.S. at the UN, while France, Germany and Russia quickly voiced their opposition.

Netanyahu also thanked Trump for his controversial relocation of the U.S. embassy from Tel Aviv to Jerusalem last May and for withdrawing from the 2015 Iran nuclear deal.

Ronen Zvulun | Reuters
An Israeli soldier stands next to signs pointing out distances to different cities, on Mount Bental, an observation post in the Israeli-occupied Golan Heights that overlooks the Syrian side of the Quneitra crossing, Israel May 10, 2018.

A United Nations spokesman quoted UN Secretary-General Antonio Guterres as being “clear that the status of Golan has not changed” — according to U.N. Security Council Resolution 497 of 1981, Israel’s administration of the territory is “null and void.” Israel maintains its right to remain there for its own security.

The security argument is compelling, analysts say — the U.S. and Israel see Iranian forces using Syria as a launch pad for attacks on Israel, and the Golan is the front line. And Washington’s recognition came several hours after a rocket fired from the Gaza Strip hit a residential area just north of Tel Aviv.

What difference does it make?

But despite the international reverberations of Trump’s proclamation, this may not make a massive difference to the status quo on the ground, experts say.

“In terms of facts on the ground, it doesn’t change very much,” Graham Griffiths, a senior analyst at Control Risks, told CNBC on Tuesday. “Israel has been occupying this territory for decades now, but this symbolic recognition by the U.S. constitutes a turning point and shows again the extent to which the Trump administration is willing to set aside past U.S. policy precedent to support Prime Minister Netanyahu in Israel.”

“On policy substance, I doubt the U.S. decision will change things on the ground,” Bremmer echoed, noting that the Israelis have held the territory for more than 50 years and Syria is an international pariah. “So there’s been no pressure on Israel to back away from the existing status quo … It’s not likely to have much impact.”

But in terms of winning Trump any new friends in the Middle East, the policy “definitely does not,” Graham said. And while Gulf Arab states are enjoying their warmest relations with the White House in several years, moves like this aren’t a good look at home for the Saudis and other major Trump allies.

“I don’t think it changes the Saudis’ fundamental approach to the Trump administration, I still think they’re very happy, but it certainly makes it awkward for them,” Griffiths said of the Saudi kingdom’s leadership.

“They have to continue to play to public opinion in the region, and just like with the Jerusalem move, this makes it much more difficult for them to do that, particularly as they don’t have anything concrete to deliver in terms of helping out the Palestinians.”

Critics say that it could also harm Israeli security by cementing Iranian desires to stay in Syria to counter Israel, and by eliminating any chance at peace with a future Syrian government.

Meanwhile, Bremmer says this boost from Trump may be enough to tip the balance in Netanyahu’s favor in the runup to Israel’s national elections on April 9, which has so far seen the greatest challenge to the prime minister’s leadership yet.

“Trump’s support could well be the game changer,” he said, while noting the slew of scandals and corruption charges assailing Netanyahu.