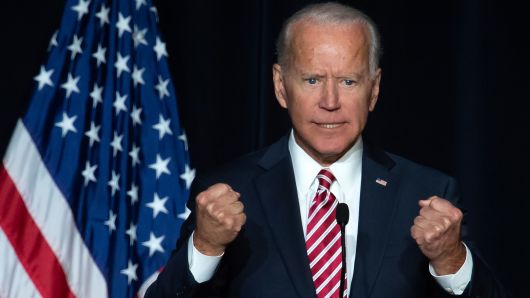 Several top Democratic donors have told former Vice President Joe Biden that they won’t help him raise funds in the early stages of the party’s 2020 presidential primary, CNBC has learned. Their reason: skepticism that Biden actually can win the Democratic primary.

Biden, who has yet to announce whether he will run, has reached out to leading financiers over the past week to see whether they will help him raise money for a presidential run. His pitch: He will need their assistance to compete against candidates, such as Beto O’Rourke and Bernie Sanders, who have raised millions of dollars over the first 24 hours of their campaigns, according to people familiar with the deliberations.

However, during those calls, some high-profile donors told Biden that they will not commit to bundling for him, at least in the early stages of the primary, said the people, who declined to be named. The donors told Biden they’re not yet convinced he can overtake the younger, more diverse and progressive field, and that they are going to wait to see how he competes in the race, the people added.

The donors did tell Biden that they’re willing to write the $2,700 checks for his campaign, which is the most an individual can give directly to a candidate in an election cycle, according to the people.

“I told him, ‘I can donate but I don’t think I can raise you money today.’ The sense we’re getting [from other donors] is yes, he’s a good guy and everybody knows him, but he has run for president a couple times and it didn’t always work out,” said a billionaire financier who spoke on the condition of anonymity. “I think with Biden there’s a feeling of ‘I like him, he’s a really good guy, but he’d be running at a moment in time that a 76-year-old white guy may not be what voters want.’ I don’t want to give chits today for Joe. What’s my benefit?”

Other donors who spoke to CNBC say they’re aware that Biden has received similar messages from fellow party financiers. Their skepticism comes at a time some donors are pledging their support to candidates such as O’Rourke.

That doesn’t mean Biden, who represented Delaware in the U.S. Senate for more than three decades, won’t have high-profile support. Famed short-seller Jim Chanos told CNBC he plans to support Biden if he runs for president. Prominent Democratic donor and business executive Dennis Mehiel is also looking to back Biden, according to people with direct knowledge of the matter.

The development comes amid recent speculation about how Biden is going to appeal to young voters as his advisors reportedly discuss ways to signal to voters that his age will not be a factor if he becomes president. The New York Times reported Biden’s team has been actively debating whether to announce an early vice presidential candidate, with former Georgia gubernatorial candidate Stacey Abrams being one of the names under consideration.

Meanwhile, Biden continues to reiterate to his allies that he’s leaning toward running for president and is looking at the start of April to roll out his campaign if he decides he wants to enter the race, people close to him said.

Political fundraisers, also sometimes known as bundlers, have been critical components in helping candidates raise millions of dollars behind the scenes. Bundlers persuade high-dollar financiers to back a particular candidate, and a few are already committing to one of Biden’s potential opponents.

Louis Susman, former U.S. ambassador to the U.K. and a lead bundler for Barack Obama’s 2008 White House run, has publicly acknowledged that he will be helping O’Rourke, the three-term former congressman from Texas. Susman told CNBC he’s been speaking with “family and friends” about backing him for president.

Mark Gallogly, the co-founder of investment firm Centerbridge Partners and another Obama fundraiser, has been indicating to friends that he’s likely to support O’Rourke as well, CNBC reported Thursday.

O’Rourke raked in $6.1 million through the first day of campaigning, while Sanders brought in $5.9 million over the course of his first 24 hours.

Obama received a lot of help from high-end bundlers, including film executive Jeffrey Katzenberg, who in 2012 assisted in raising at least $500,000 for his re-election campaign, according to the nonpartisan Center for Responsive Politics. The securities and investment industry bundled $22 million for Obama that year.