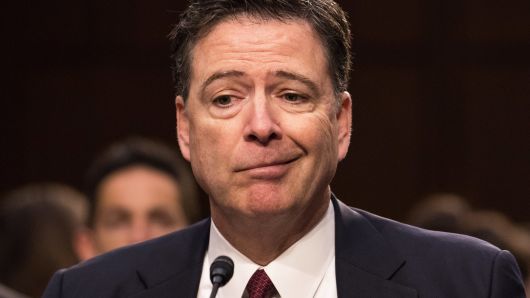 WILLIAMSBURG, Va. — Democratic presidential contenders want Wall Street executives locked up for crimes committed on their watch — but former FBI Director James Comey, once the top prosecutor in Manhattan, said it might not be so easy.

Comey, who served as the U.S. Attorney for the Southern District of New York in the days after the dotcom meltdown of the early 2000s, weighed in on the matter on Friday during a rare question-and-answer session at his alma mater William & Mary.

Responding to a student who asked about the lack of major prosecutions after the 2007 financial crisis, Comey said that unlike drug prosecutions, white-collar cases require prosecutors to demonstrate that the person they are charging knew what they were doing was wrong at the time.

“Show me that these bank CEOs, when they engaged in these transactions, knew they were involved in a fraudulent transaction. It is incredibly difficult to do,” Comey said.

He said that the difficulty was at times dispiriting, but defended his record and the record of those who followed him.

Some of Comey’s successors as Manhattan’s U.S. attorney, including Preet Bharara, who took the job in 2009, have been criticized for failing to go after those responsible for the financial crisis and instead taking on cases that were easier to prosecute.

“It’s frustrating to me, but I can’t imagine the country being any different,” Comey said. “I don’t want to change the burden of proof, I don’t want to lower any of those things. There’s lots of things I want to do to try to make it harder for bad people to do bad things, but my reaction is: I’m proud of what I did.”

Attention on white-collar crime has heated up as a result of the Democratic presidential primary, which features a number of lawmakers who have made addressing inequities in the criminal justice system a central element of their pitch to voters.

The nation’s attention was focused on the matter earlier this month, after President Donald Trump’s former campaign chairman Paul Manafort received a sentence of about seven years for a slew of crimes including fraud, a duration that fell far short of what federal sentencing guidelines recommended

The sentence drew scrutiny not just from liberal Democrats like Sen. Elizabeth Warren, D-Mass., who has vowed to increase the criminal liability of big bank executives, but also from more moderate contenders like Sen. Amy Klobuchar, D-Minn., a former prosecutor. Klobuchar at the time slammed what she called “two systems of justice.”

“Crimes committed in an office building should be treated as seriously as crimes committed on a street corner,” Klobuchar wrote in a post on Twitter.

But Comey said that, in effect, crimes committed in an office building are fundamentally harder to prosecute.

Comey said that, in a drug case, prosecutors have a mission to connect individuals to the transaction. He said that, for instance, if there is a kilo of heroin on the table, “and we are all sitting around it, and the DEA kicks in the door, everybody is going to jail.”

“It’s not open to anybody to say, ‘My lawyer has looked at this kilo.’ Or, ‘My accountant has reviewed this kilo.’ Or, ‘If you look at footnote 17 of our disclosure, this kilo is mentioned,” he said.

Comey said that the process for white-collar cases was the reverse.

“At the end of the white collar investigation, I will know everyone who was at the table,” Comey said. “Mortgage backed securities out the wazoo, we will untangle it. But then, we have to prove that everybody involved in the transaction knew it was wrong. And then they can say, well, ‘Moody’s looked at this.’ Or, ‘My law firm looked at this. It never occurred to me that this might be wrong.'”

Experts have said that other reasons also account for disparities in the frequency of prosecutions and the length of sentencing for white-collar crime, versus drug offenses and other criminal violations.

Career ambitions on the part of the prosecutor often play a role, according to Brett Curry, a professor at Georgia Southern University who recently co-authored the book “U.S. Attorneys, Political Control, and Career Ambition.”

“There has been an increase in the propensity of former prosecutors to pivot into the white-collar defense bar,” Curry said in an interview. He said that prosecutors “want to seem serious” — so they don’t avoid white-collar prosecutions entirely — but that they also “look across the table at the people who might want to hire” them.

The reporter Jesse Eisinger made a similar argument in his 2017 book, “The Chickensh– Club,” which describes a “symbiotic” relationship between top law firms and the Department of Justice.

That book got its title from Comey, who used the phrase pejoratively to describe young prosecutors who had never lost a case and feared taking on challenging prosecutions that could blemish their record.

“Jim Comey was saying to young prosecutors that their job was not about winning, that they couldn’t be focused on just getting their best record that they could get — taking the low hanging fruit,” Eisinger said in a 2017 radio interview.

“Their job was about more than that. It was about doing justice. And so he was urging his prosecutors to [try] ambitious cases, righteous cases, and not to worry about winning and certainly not to behave as if winning was the only thing that mattered.”