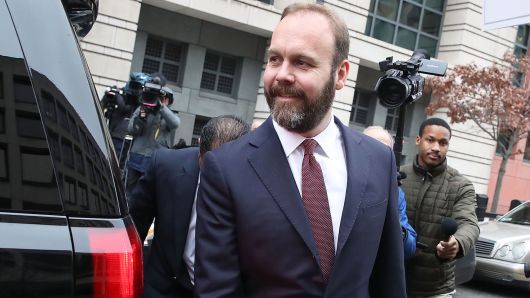 “Accordingly the parties do not believe it is appropriate” to move on to Gates’ sentencing phase, the filing in Washington, D.C., federal court said.

The joint report from Mueller and Gates’ attorney, which asks a federal judge for 60 more days before providing the next update on Gates’ status, comes amid increasing speculation that the special counsel’s Russia probe is coming to an end.

Gates, alongside Manafort, had initially been charged by Mueller’s prosecutors with money laundering, misleading investigators and other crimes.

In February 2018, Gates struck a deal with prosecutors, pleading guilty to two criminal counts including conspiracy and lying to FBI agents.

Since then, Gates appears to have cooperated extensively with Mueller’s team. His most visible role as a cooperating witness came in August, when he testified against Manafort in his tax and bank fraud trial in Virginia federal court.

Manafort was convicted on eight of the 18 counts lodged against him in that case. He struck his own plea deal on the eve of a second Mueller trial in Washington, D.C., federal court.

Mueller is investigating Russian meddling in the 2016 presidential election, and possible collusion between the Kremlin and the Trump campaign. Trump has denied collusion or any other wrongdoing.

Some lawmakers on Capitol hill have predicted that the Mueller probe is in its final stages, and that a summary report of its findings could be submitted to the Justice Department within days or weeks.

Recent moves by the special counsel appear to lend credence to some of those predictions. Top officials on Mueller’s team, including lead investigator David Archey and top prosecutor Andrew Weissman, have recently concluded their work for the probe.

New developments in other Mueller-related cases have fanned further speculation. Trump’s first national security advisor, Michael Flynn, who pleaded guilty to lying about his conversations with then-Russian ambassador to the U.S. Sergey Kislyak, is virtually done cooperating with the probe, prosecutors said in a Tuesday court filing.

Yet Gates’ continued participation in “several” investigations suggests that, despite growing impatience on both sides of the aisle, Mueller may not be so close to finishing his much-scrutinized and much-hidden report.

In January, Mueller said in a court filing that Gates “continues to cooperate with respect to several ongoing investigations, and accordingly the parties do not believe it is appropriate to commence the sentencing process at this time.”

“The status of this matter has not changed substantially since the January report,” Mueller and Gates’ lawyer, Thomas Green, said in the court document Friday morning.

Gates has not yet received a sentencing date.