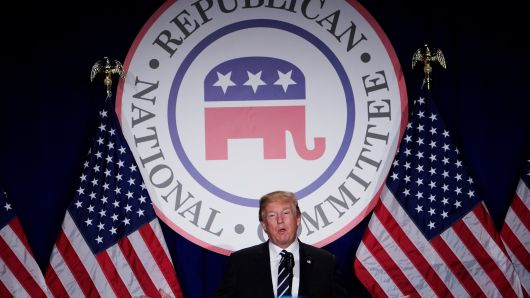 Top Republican National Committee donors huddled over the weekend at President Donald Trump’s private Mar-a-Lago resort in Florida to discuss crafting a 2020 message that will, in part, argue that minorities have thrived under his administration.

In private meetings with donors, officials explained that the party would seek to appeal directly to black and Hispanic voters, according to people with direct knowledge of the matter who declined to be named.

The talking points that were described to donors focused on the idea that minorities’ lives have improved under Trump as the economy keeps adding jobs and the unemployment rate stays low.

The Washington Post reported on Sunday that President Donald Trump’s campaign and his allies are hoping to break through to Hispanic voters in the battleground state of Florida. The campaign has also started running Spanish-language ads targeting Floridians on Facebook.

RNC press secretary Blair Ellis did not rule out that donors and officials discussed a strategy of trying to appeal to minority voters.

“We placed a premium on building relationships and having a presence in every community and neighborhood across the country,” Ellis said. “We made big inroads this midterm cycle, and now with that permanent infrastructure in place — combined with the positive results of the Trump administration — we are primed to build on this success in 2020.”

The Trump campaign also did not deny the focus. Indeed, spokeswoman Kayleigh McEnany offered what could be a preview of the messaging push – citing record lows for black and Hispanic unemployment and criminal justice reform, among other issues. “President Trump has undeniably prioritized the interests of all Americans, including those traditionally left behind and forgotten by Washington politicians,” she said.

The president and the GOP have an uphill climb if they want to broaden their appeal with minorities, however. A regularly updated Politico/Morning Consult poll shows that the president’s approval among black and Hispanic voters has waned since his inauguration. In April 2017, the poll showed that Trump had 54 percent of approval from Hispanics, but now he has support from 20 percent. The highest standing he had with black voters was 28 percent, although it is currently at 12 percent.

A Rasmussen Poll in August showed Trump with a 36 percent approval with black voters.

Trump’s proposed border wall with Mexico has drawn intense criticism. Black voters oppose it more than Hispanics, according to a 2018 Quinnipiac poll. The survey shows 87 percent of black voters dislike the wall while 71 percent of Latino voters also oppose it.

Trump himself was at Mar-a-Lago this past weekend and met with Republican donors as part of a fundraiser for the Trump Victory Committee, a joint fundraising group that helps raise money for the campaign and the RNC.

Trump met with GOP financiers on Friday and Sunday. An RNC official told the White House press pool that the committee raised $7 million throughout the two events. Between the campaign and the two joint fundraising committees, Trump has raised over $100 million since he entered the White House.

During the 2016 presidential campaign and throughout his presidency, Trump has repeatedly claimed that the unemployment rate since he became president has gone down.

President Trump’s policies have benefited all Americans, providing unparalleled opportunity for under served communities and forgotten men and women all across the country. While unemployment overall has hit generational lows, the unemployment rates for Hispanics and African Americans have reached the lowest point in history. Paychecks are increasing at the fastest pace in a decade, and companies are increasingly hiring Americans without college degrees. President Trump signed historic criminal justice reform into law, remedying unfair sentencing disparities, and the President’s budget mandates that $1 billion be devoted to increasing access to child care in under served populations. President Trump has undeniably prioritized the interests of all Americans, including those traditionally left behind and forgotten by Washington politicians.