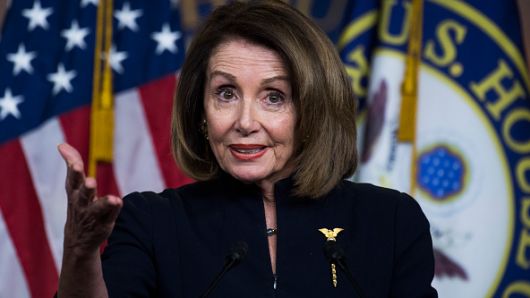 Her comments to reporters came shortly after the White House said President Donald Trump would declare a national emergency in order to “build the wall, protect the border, and secure our great country.”

Pelosi said she was not advocating for Democrats to declare a national emergency but that Trump was establishing a precedent that should, at least, make Republicans nervous.

“If the president can declare an emergency on something he has created as an emergency, an illusion that he wants to convey, just think about what a president with different values can present to the American people,” Pelosi said.

“You want to talk about a national emergency? Let’s talk about today,” Pelosi said, referring to the first anniversary of the school shooting in Parkland, Florida, that left 17 dead on Feb. 14, 2018.

She said the shooting was “another manifestation of the epidemic of gun violence in America.”

Sen. Kamala Harris, who is running for president, echoed her fellow Californian’s remarks in a post on Twitter, but stopped short of saying she would as president declare a national emergency.

“Declaring a national emergency over this President’s vanity project is ridiculous,” Harris wrote. “We don’t need a wall. Instead, we should address the actual emergencies facing our country — everything from gun violence to the opioid crisis.”

Sen. Elizabeth Warren, another 2020 contender, wrote on Twitter that gun violence, climate change and the country’s opioid epidemic were all emergencies.

“Donald Trump’s ridiculous wall is not an emergency,” the Massachusetts Democrat wrote.

A national emergency declaration makes powers available to the executive that are otherwise impermissible, such as the reallocation of certain funds that have been appropriated by Congress. Scholars continue to debate the legality of emergency powers.

“Let’s hope we don’t have additional national security and humanitarian crises,” she said.