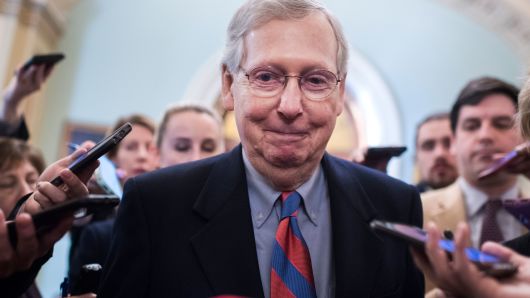 “I’ve noted with great interest the Green New Deal, and we’re going to be voting on that in the Senate to give everybody an opportunity to go on record,” McConnell told reporters.

The bill, which is not expected to pass the Republican-dominated upper chamber, could force some Democrats to make a politically awkward calculation.

Democratic liberals, including all of the senators currently running for president, have come out in support of the legislation, which calls for generating 100 percent of the nation’s power from renewable sources within 10 years. Scientists have said that dramatic, immediate action is necessary to stem the catastrophic effects of climate change.

Democratic moderates have been less than enthusiastic about the proposal. House Speaker Nancy Pelosi derisively referred to the House version of the bill as a “green dream,” while only 11 of the 47 senators who caucus with the Democrats have signed on to sponsor the bill.

WATCH: Tax the rich: What Democrats’ plans could mean for growth and inequality

Sen. Sherrod Brown, D-Ohio, who is widely expected to enter into the 2020 race, has declined to say whether he supports the proposal.

“I’m not going to take position on every bill that’s coming out,” he said Tuesday, according to Politico. “I support a Green New Deal. I think we need to aggressively support climate change [legislation]. That’s my answer.”

Republicans control the Senate, with 53 members of the 100-seat chamber. Democrats control the House of Representatives, but it is not clear if the House will vote on the measure under Pelosi’s leadership.

“It will be one of several or maybe many suggestions that we receive,” Pelosi told Politico in an interview last week. “The green dream or whatever they call it, nobody knows what it is, but they’re for it right?”

President Donald Trump, meanwhile, used the Green New Deal as a new line of attack against Democrats in his first major rally of the 2020 campaign season.