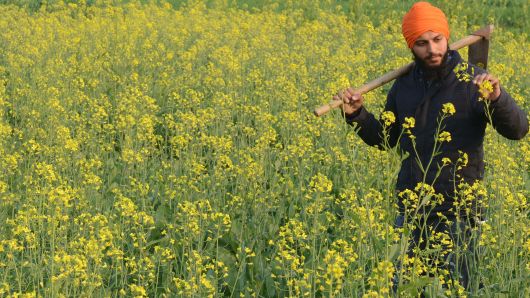 Investors will be paying close attention to India’s budget.

As India unveils its interim budget on Friday, Prime Minister Narendra Modi and his party will likely dole out handouts to attract voters ahead of the general election that’s due to be called by May. The main planks of India’s budget will likely include: A farm sector relief package to attract the crucial farmers’ vote, tax cuts and support for badly hit small and medium businesses.

The ruling Bharatiya Janata Party’s (BJP) suffered a stinging election defeat in December, losing three key states to the opposition party. The budget is all the more crucial now as it marks the last major chance for the BJP to consolidate support from its voter base, pointed out Rajiv Biswas, Asia Pacific chief economist at IHS Markit.

“A farm sector package will be a centerpiece of the upcoming Budget, due to the crucial importance of the farmers’ vote…” -Rajiv Biswas, Asia Pacific chief economist at IHS Markit

The government’s new budget will likely introduce measures to boost support for rural voters, as well as to small and medium businesses, that were badly affected by the unpopular demonetization program and implementation of the new Goods and Services Tax in the last few years.

The need to maintain fiscal prudence, however, will keep the government’s budget in check, preventing them from giving out too many sweeteners, analysts said.

A relief package for farmers will be a key focus in the budget as they make up a large proportion of the Indian electorate and many of them struggle with high debt and crop failures, analysts said.

“A farm sector package will be a centerpiece of the upcoming Budget, due to the crucial importance of the farmers’ vote, with 69 percent of India’s population still living in rural areas,” said Biswas.

“Key measures that could be included in the BJP’s farm package include income support measures and interest relief for crop loans for small farmers to help mitigate the impact of rural debt distress in many states,” Biswas added.

But the devil is in the details, as debate is ongoing as to what form that relief could take.

Rhetoric has been split on whether the package would include a cash transfer scheme for smaller farmers, loan waivers, or a broader universal income scheme, according to Radhika Rao, an economist at Singapore bank DBS.

Other measures may include personal income tax relief for low income households, and measures to reduce tax and regulatory burden on small and medium-sized businesses, according to Biswas and some other analysts.

Such measures will set the stage for a budget that would be “‘popular’, yet not profligate,” said Vishnu Varathan, Mizuho Bank’s head of economics and strategy.

However, he added: “The need for fiscal discipline means that the BJP cannot be unbridled on using the Budget to dish out ‘goodies’. So a very mild positive effect may be the outcome.”

The farmers relief package is thus both “a political hot potato” as well as “an onerous fiscal burden,” said Varathan.

The finance ministry had cut spending amounting to 750.8 billion rupees ($10.55 billion) in the last financial year ending in March 2018.

But in its desperation to find ways to pay for pre-election spending, the government has also pressed the central bank to part with more of its reserves, causing a rift that culminated in the resignation of its governor in December.

According to a Reuters report citing two government sources, the farm relief package alone could run up to at least one trillion rupees ($14 billion) — that’s if the government is to have a meaningful impact on which way voters lean in rural areas, home to two-thirds of Indians.

A Morgan Stanley report in January estimated that the farmers package could cost 0.7 percent of India’s GDP if it was to focus on small and marginal farmers, or an annual 0.2 percent of GDP or 440 billion rupees.

Regardless, the pressure is on the BJP to address the ongoing farmers’ distress, said Rao, as the opposition Indian National Congress has pledged a “minimum income guarantee” to the poor, if voted to power.

Experts say the likely optimal option could be a cash transfer to farmers instead of full loan waivers, but that might be somewhat of a disappointment to farmers, said Varathan.

However, “the overall political calculus will still shift against him (Modi) should he try to be far more generous than the Budget allows,” Varathan said.

Given that financial constraint, any election sweeteners in the budget is likely to be long-term in nature, said Capital Economics Senior India Economist Shilan Shah.

“They could include pledges to boost spending in rural areas or exempt more SMEs from the GST. This type of announcement would give the government wriggle room to adjust course if needed at a less politically-sensitive time,” he said.

— Reuters contributed reporting to this story.

WATCH: Why is India growing so fast?