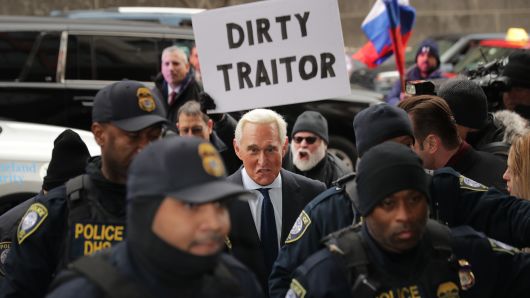 Trump friend and advisor Roger Stone pleads not guilty in Mueller case, calls it ‘a lynching’

President Donald Trump’s longtime friend and advisor Roger Stone pleaded not guilty Tuesday to criminal charges related to his alleged attempt to hide his efforts to have WikiLeaks release information stolen from Democrats by Russian agents during the 2016 presidential campaign.

Stone later appeared on a conspiracy theorist’s Internet show to call the case a “lynching” perpetuated by special counsel Rober Mueller “because I support Donald Trump,” and because “I helped take down” Hillary Clinton.

Stone also said on that same show that the judge who will oversee his case going forward, Judge Amy Berman Jackson, “essentially ordered torture” for Stone’s former lobbying partner, Paul Manafort, the ex-Trump campaign chief who is awaiting sentencing for a slew of charges lodged by Mueller.

Defense lawyer Robert Buschel entered the plea on Stone’s behalf during an arraignment in U.S. District Court in Washington.

The hearing lasted just 13 minutes, and the normally verbose and brash Stone did not make any comment to reporters when he entered or left the courthouse.

He did flash a double-handed victory sign, emulating his political hero Richard Nixon, to a crowd of people just before hopping into a car and leaving.

Stone was arrested Friday during a predawn FBI raid on his home in Florida. The charges were part of Mueller’s investigation into Russian meddling in the 2016 U.S. election.

Stone, a 66-year-old self-described political dirty trickster and longtime Republican operative, is charged with five counts of making false statements, one count of obstructing a congressional proceeding and one count of witness tampering. 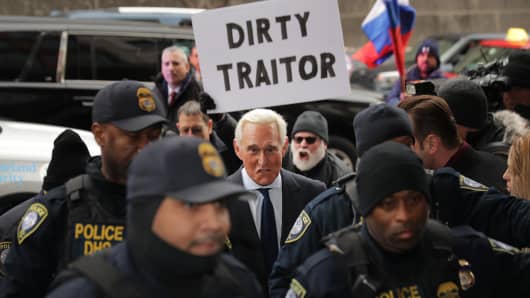 Chip Somodevilla | Getty Images
Roger Stone, a longtime adviser to President Donald Trump, arrives at the Prettyman United States Courthouse before facing charges from Special Counsel Robert Mueller that he lied to Congress and engaged in witness tampering January 29, 2019 in Washington, DC. A self-described ‘political dirty-trickster,’ Stone said he has been falsely accused and will plead ‘not guilty.’

The other judge, Jackson, will conduct that hearing. A prosecutor in Mueller’s office said the case will be prosecuted by the special counsel’s team and the U.S. Attorney’s Office for the District of Columbia.

Robinson allowed Stone to remain free on a $250,000 signature bond that was set at his first court appearance on Friday in Fort Lauderdale, Florida.

The judge stressed that Stone should have no contact with witnesses in the case. She also continued an order restricting his travel to between Florida and his future court appearances in Washington and to the New York City area.

In a barely audible voice, Stone said, “Yes, your honor,” when Robinson reminded him of his release conditions.

During the hearing, a crowd outside of the E. Barrett Prettyman Courthouse held signs with messages that included, “Free Stone Fire Mueller,” “We Stand with Stone,” “Lock him Up,” and “Dirty Traitor.”

One person waved a Russian flag, and another played the Russian national anthem.

Mueller accuses Stone of lying to Congress about his alleged efforts to have WikiLeaks disseminate Democratic National Committee communications that were hacked hacked by Russian agents.

The indictment alleges Stone was was in contact with top-ranking Trump campaign officials about efforts to leak damaging information about the Democratic nominee Clinton right before Election Day.

It also says a senior official in the Trump campaign “was directed” to talk with Stone about potential future releases by WikiLeaks.

After his arraignment, Stone was interviewed by Alex Jones on Jones’ InfoWars show, where he blasted the case against him. Jones routinely trafficks in unfounded conspiracy theories.

The outspoken Stone noted that there was not, despite some peoples’ speculation that there would be, a gag order slapped on him at his arraignment.

“There was no suggestion of a gag order, but this would not have been the appropriate time, that, I suspect it would be coming from Judge Amy Berman Jackson, who essentially ordered torture for Paul Manafort, to torture him, and has rejected every challenge to Robert Mueller’s authority,” Stone said.

” She at this point will be the judge in my case, we’ll see about that.”

Jackson had revoked Manafort’s $10 million release bond last June after he was charged with trying to tamper with witnesses while under house arrest awaiting two federal criminal trials related to crimes connected to his consulting work for pro-Russia politicians in Ukraine. After he was convicted of some charges at his first trial, Manafort pleaded guilty to other charges on the eve of his second scheduled trial.

“This is a lynching,” Stone said. “This is a legal lynching of me because I appear on InfoWars, because I’m friends with Alex Jones, because I support Donald Trump and I supported him for president and I still support him, because I helped take down the evil queen, the foul-mouthed, short tempered, self-centered kleptocrat Hillary Clinton.”

“And the irony of course is that I’m charged with perjury, lying before Congress, which I’m not guilty of,” Stone said. 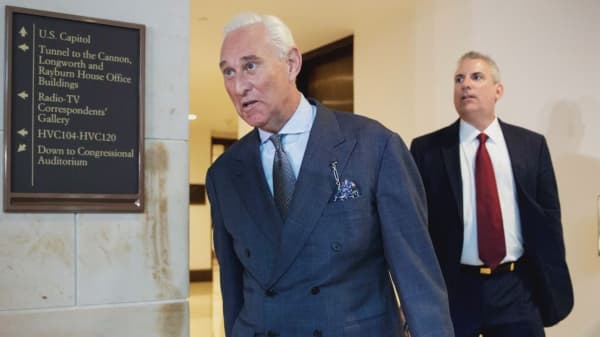