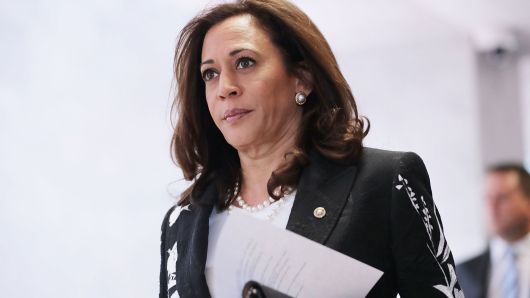 Sen. Kamala Harris’ history with Wall Street and the banking industry is about to come under scrutiny in a big way as the California Democrat joins what is expected to be large group of candidates seeking to topple President Donald Trump in 2020.

Harris, of California, has a history of squaring off with the banking industry. The senator, who is under fire from the left over her track record on criminal justice matters, has also been criticized for not going far enough against Wall Street.

With the Democratic base moving further to the left since President Donald Trump’s election, the party’s 2020 presidential candidates’ relationship with big business and Wall Street are being subjected to intense scrutiny.

“There is definitely a group of caucus-goers and New Hampshire primary voters that are always going to have an issue when they hear ‘Wall Street’,” said Gillian Rosenberg Armour, a Democratic political strategist who worked on Barack Obama’s 2008 campaign.

New York’s Sen. Kirsten Gillibrand, who said earlier this month that she would run for president, has voted for increased regulation of the financial industry, has received criticism from the left for taking money from big money interests and gauging the support of Wall Street financiers. Former Vice President Joe Biden, who is considering whether to jump into the 2020 race, has deep, long-held ties to the banking industry.

In a crowded Democratic primary field, Harris will be vying for liberal voters against potential candidates who have made cracking down on Wall Street their personal brand. Elizabeth Warren went from a prominent bankruptcy law scholar to creating the Consumer Financial Protection Bureau before she became a Massachusetts senator. Sen. Bernie Sanders, who is considering whether he should run again, proposed breaking up “too-big-to-fail” banks, introducing a bill to do just that in October.

“How [Harris] frames her record is really going to be the deciding factor,” Armour said.

Harris served as district attorney in San Francisco and as California attorney general for six years each before being elected to the Senate in 2016.

As attorney general, Harris made waves in 2011 after pulling California out of national negotiations pursuing a monetary settlement from major banks for foreclosed households during the financial crisis. She believed she could do better for her state.

In her new book, “The Truths We Hold,” the senator recounts a tense phone conversation with J.P. Morgan CEO Jamie Dimon, persuading him to provide more settlement money. The two yelled at each other “like dogs in a fight,” she wrote. A spokesperson from J.P. Morgan declined to comment on the conversation.

Harris later reached a $25 billion settlement deal from J.P. Morgan and other banks, much higher than the $2 billion to $4 billion initially on the table. California homeowners received over $18 billion in mortgage relief as a result of the deal, according to a report by the attorney general’s office.

“This outcome is the result of an insistence that California receive a fair deal commensurate with the harm done here,” Harris said in a statement at the time.

Harris later backed the California Homeowners Bill of Rights, a package of legislation to protect homeowners during the foreclosure process. The legislation also extended the statute of limitations to prosecute mortgage fraud from 1 to 3 years.

In 2017, her first year as a U.S. senator, she introduced a bill alongside fellow Democrats Elizabeth Warren and Dianne Feinstein targeting executives at big banks. The bill, entitled the “Accountability for Wall Street Executives Act,” would allow state law enforcement to issue subpoenas when investigating bank fraud.

Still, liberal critics allege that in many cases, Harris was too restrained when going after the financial industry. People who supported Sanders in the 2016 primary have been especially skeptical of Harris’s values.

After negotiating the $25 billion settlement deal, Harris also introduced a special task force to prosecute mortgage and foreclosure fraud. However, the team, known as the Mortgage Fraud Strike Force, only processed three cases in 10 years, according to a report by the East Bay Express.

In 2012, the California Department of Justice found in an investigation that OneWest Bank participated in “widespread misconduct” when foreclosing on homes, recommending that Harris file a civil enforcement action against the bank. However, Harris declined to prosecute OneWest or its then-CEO, Steven Mnuchin, despite the department’s recommendation. A spokesman for Mnuchin called the allegations “garbage.”

The OneWest issue was resurfaced in 2017 when Mnuchin was nominated to serve as Treasury secretary. She was also the only Democratic Senate candidate to receive a donation from Mnuchin during the 2016 elections, according to FEC records. Still, she voted against his confirmation as Treasury secretary.

In a 2017 interview with The Hill, Harris pushed back against criticism of her decision. “We went and we followed the facts and the evidence, and it’s a decision my office made,” she said.

“There was no question One West conducted predatory lending, and Senator Harris believes they should be punished,” Ian Sams, national press secretary for Harris’s campaign, told CNBC in an email. “Unfortunately, the law was squarely on their side and they were shielded from state subpoenas because they’re a federal bank.” The California Justice Department’s memo noted that “the investigation was hampered by our inability to subpoena OneWest,” but that would not have prevented Harris from filing a civil enforcement action against the bank if she chose to do so.

Harris has pledged to not accept money from corporate PACs for her campaign, falling in line with a trend that gained steam in the 2018 midterms.

“This campaign will not take a dime from corporate PACs,” she tweeted. “We don’t have to accept a system that drowns out your voice.” In the first 24 hours of the campaign, Harris raised over $1.5 million with an average contribution of $40.

Still, there are signs that Harris plans to fund her presidential run with more than small-dollar donations.

Her campaign organization received at least $765,000 from the securities and investment industry over the past two years. In addition, before she announced her campaign, Harris reached out to Wall Street executives, who could be big donors down the line.

Armour, the former Obama strategist, pointed out that Harris has done a “really good job” so far positioning her extensive experience as a prosecutor as an asset to a progressive platform instead of a liability.

If Harris can frame her Wall Street ties in a similar fashion, “I wouldn’t rule anyone out,” Armour said. “There’s a pathway for everyone.”