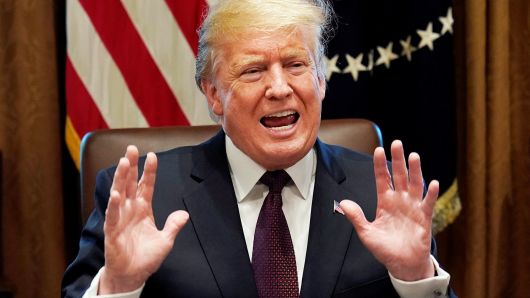 President Donald Trump has been hailed as the greatest rule-cutter in modern American history.

But despite his administration’s efforts to pare back federal regulations on business, in cases that have been challenged in court, Trump has fared quite poorly.

More than 90 percent of the Trump administration’s deregulatory efforts have been blocked in court, or withdrawn after a lawsuit, according to a running tally maintained by the Institute for Policy Integrity, a nonpartisan think tank sponsored by the New York University School of Law.

In cases involving the environment, immigration, disabled individuals, affordable housing, student loans and other matters, Trump has been blocked from stripping protections guaranteed by previous administrations.

The low success rate is unusual. In a typical administration, the government wins about 69 percent of the time in cases involving challenges to agency action, according to an average of 11 studies on the matter.

But federal courts have largely not signed onto the president’s agenda, handing him a string of defeats in disputes that have largely flown under the radar.

In many cases, courts said the administration’s actions were not justified because it failed to solicit public input before taking an action, or because it took an action that was arbitrary and capricious.

In recent days, some of the Trump’s losses have earned a high profile.

Last week, a federal court blocked the administration’s attempt to add a citizenship question to the 2020 census after a host of U.S. states, as well as civil society groups, contended that the addition of the question would harm minority groups.

A day before, a federal court in Philadelphia issued a nationwide injunction blocking new rules that would limit women’s access to free birth control.

On Tuesday, the U.S. Supreme Court took no action on the Trump administration’s request for it to review a lower court decision blocking the government from terminating DACA, an Obama-era program shielding young migrants who were brought to the United States illegally as children from deportation. That was a major setback for the president as he seeks to negotiate with congressional Democrats over the partial government shutdown.

Groups that oppose regulation have remained largely supportive of the president’s efforts, although some have pointed out “warning signs” that could undermine his deregulatory agenda.

The White House, which did not respond to a request for comment for this article, claimed last year that deregulation saved American families and businesses $23 billion for the fiscal year.

Trump has championed deregulation and said that it is responsible for the country’s economic success.

Dan Bosch, director of regulatory policy at the right-leaning American Action Forum, said that the administration’s failures in court suggest that agencies “need to do their homework.”

“It looks like what actually happens is they may have skipped a step in the regulatory process, and they may need to go back and build up a more robust effort to explain the action that they are trying to take,” Bosch said.

He said that as a result of having to go back through the process, the administration’s rewritten rules will likely be harder to reverse.

“In some form, they will be successful,” Bosch said. “It may not look exactly like what is being written — the court had some problems — but they will get to their end goal, which is deregulation.”