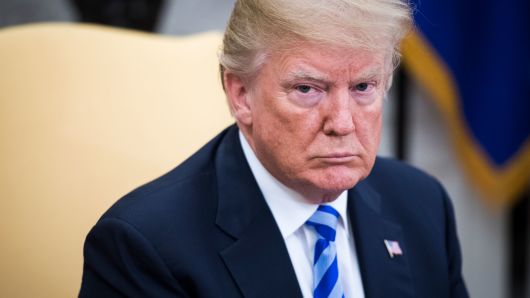 President Donald Trump on Friday accused his former lawyer Michael Cohen of “lying to reduce his jail time” in the wake of a bombshell report from BuzzFeed News that said the president himself directed Cohen to lie to Congress.

Trump did not directly address the BuzzFeed article in his tweet, but added, “Watch” Cohen’s “father-in-law!”

BuzzFeed reported Thursday night that Trump directed his former personal lawyer and fixer to lie to Congress about talks regarding a possible Trump Tower project in Moscow.

BuzzFeed’s report did not rely on Cohen’s claims, but rather attributes the information to two federal law enforcement officials involved in the investigation. It also cites “multiple witnesses from the Trump Organization and internal company emails, text messages, and a cache of other documents” related to Trump’s reported directive that were found by special counsel Robert Mueller’s team of investigators.

Confronted with such evidence, Cohen acknowledged that he received the instructions from Trump during his interviews with the special counsel’s office, BuzzFeed said.

Neither NBC News nor CNBC has confirmed the BuzzFeed report.

“I’m not going to give any credence” to Cohen, “who’s a convicted liar,” White House spokesman Hogan Gidley said on Fox News minutes after Trump’s tweet.

A lawyer for the Trump Organization did not immediately respond to CNBC’s request for comment. Rudy Giuliani, who represents Trump in the Mueller probe, told The Washington Post: “If you believe Cohen, I can get you a great deal on the Brooklyn Bridge.” He made a similar remark to NBC News.

Lanny Davis, who represents Cohen, said the former Trump fixer declined to comment on the BuzzFeed article. A spokeswoman for Davis did not immediately respond to CNBC’s request for comment on Trump’s tweet.

Trump has previously suggested that he has knowledge of damaging information about Cohen’s father-in-law.

In a telephone interview on a Fox News program on Saturday, Trump slammed Cohen as a “rat” and said he “should give information maybe on his father-in-law, because that’s the one that people want to look at.”

Mueller, a former FBI director under President George W. Bush, is investigating Russia’s attack on the 2016 election and potential coordination between the Kremlin and the Trump campaign. Trump has repeatedly denied collusion and obstructing justice, while labeling the Mueller probe a “witch hunt.”

Cohen talked to Senate and House investigators in October 2017 about the Moscow real estate negotiations.

Cohen, who once said he would take a bullet for Trump, pleaded guilty in November to lying to Congress about the Trump Tower Moscow project, which never came to fruition. Prosecutors said Cohen gave congressional investigators the false impression that talks about the possible tower ended in January 2016, just as the presidential primary season was kicking off. Cohen later admitted he had actually talked about it as late as June 2016.

Cohen has cooperated extensively with Mueller, according to court filings.

In August, Cohen had pleaded guilty to several charges in a case brought by federal prosecutors in the Southern District of New York. He said Trump had directed him to commit campaign finance violations by coordinating payoffs to two women who had said they had sexual interactions with Trump more than a decade before he ran for president.

The White House has denied the president engaged in the purported trysts.

In December, Cohen was sentenced to three years in prison, and is due to begin his term in March. Trump has called Cohen a “weak person” and a “rat.”

Cohen is scheduled to testify publicly before the House Oversight Committee on Feb. 7.

BuzzFeed’s story came after The Wall Street Journal reported that Cohen had made a failed attempt to rig online polls — including one conducted by CNBC — in 2014 “at the direction and for the sole benefit of” Trump when he was thinking about making a run for the White House.

Cohen addressed that story directly in a tweet Thursday morning, lamenting his “blind loyalty to a man who doesn’t deserve it.”