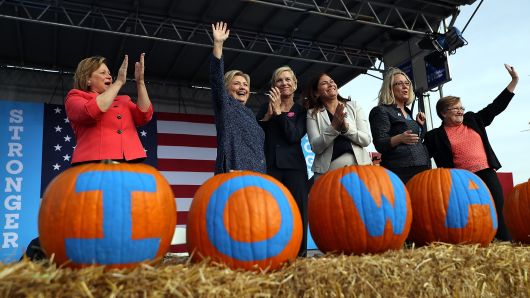 As potential Democratic presidential candidates scramble to scoop up experienced staffers in Iowa ahead of the 2020 race, one election veteran who has worked on the Iowa campaigns for Hillary Clinton and Barack Obama has taken himself out of consideration.

“I can tell you unequivocally that I am not talking to Senator Warren’s team — or any other current or potential Presidential Candidate — about joining their campaign, and have no interest in doing so,” Troy Price said in an email Monday, when CNBC asked whether he would potentially join an as-yet-to-be-announced campaign or the Warren team. The Massachusetts senator has opened an exploratory committee.

Price was unanimously re-elected to a second term as the chair of the Iowa Democratic Party last month. The state party came under scrutiny during the 2016 caucuses after supporters of Sen. Bernie Sanders, I-Vt., alleged pro-Clinton prejudice.

The Des Moines Register called the first-in-the-nation caucus a “a debacle, period” and criticized the state’s then-Democratic Party chairwoman, Andy McGuire, for lacking transparency. McGuire said at the time that the results were final, and noted that the raw vote data that some were asking for had never been released before.

Price has pledged a fair process and ruled out joining any campaign even after the Iowa Democratic caucus concludes, except in his role as the chair of the Iowa Democrats supporting the eventual nominee.

“I was recently re-elected unanimously by our state Central Committee and vowed at that time to lead an open, transparent, accessible, and fair caucus-to-convention process,” Price said. “That remains my focus today and for every day until the process is concluded next year.”

While it is still very early in the process, so far Clinton and Obama staffers, as expected, have been in demand.

In addition to those three, it appears Warren has on her team Clinton’s top two political staffers who worked on the former secretary of State’s New Hampshire team, Liz Wester and Kate Moore.

Both of those staffers have previously worked for Warren. The Boston Globe reported on Wester’s hiring on Saturday. Moore has held a variety of roles with Warren since 2012, according to her LinkedIn page.

The race to hire experienced staffers is expected to get more intense. One Democratic staffer in Iowa told CNBC on the condition of anonymity that he was in communication with at least five presidential hopefuls about a position on their campaigns.

“It’s definitely a staffer’s market right now,” he said. “A lot of the time, especially in the 2016 caucus here, people who were field directors in 2014 went down a peg. That’s not happening. People are moving laterally or above.”