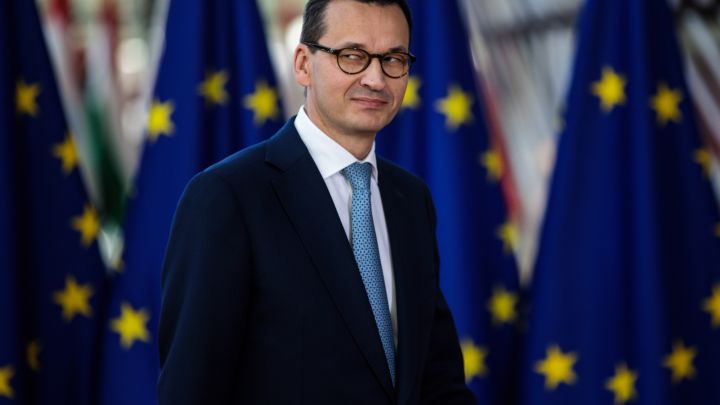 Poland’s prime minister launched a heavy critique of the European Union, saying that Brussels can fail to treat different member states in a fair and balanced way.

Mateusz Morawiecki, from the conservative Law and Justice (PiS) party, believes the EU has shown “discrimination” in how it deals with various countries, citing the examples of fiscal policy and energy.

“Different countries, different member states are treated quite differently in very similar situations, so this probably a definition of discrimination isn’t it?” Morawiecki said to CNBC’s Geoff Cutmore in an exclusive interview in Warsaw, Poland on Tuesday.

“One country has a budget deficit of 2.4 percent and another country has a deficit exceeding 3 percent, which is the Maastricht Treaty criteria and they are treated differently because of some other aspects,” he said, in reference to a recent dispute between Italy and the EU.

The European Commission was not immediately available for comment when contacted by CNBC.

“This has to be really explained to the public, because I talk to my Italian friends and they are very upset about this treatment and people in Poland and in the Czech Republic, in the Slovak Republic, and other countries ask what does this really mean? Why there are two categories or different categories of countries, this is not just, this is not equality.”

Brussels demanded Rome to lower its budget deficit target for 2019, which stood at 2.4 percent. At the same time, France’s prime minister said in December that Paris is likely to hit a deficit of 3.2 percent in 2019. Pierre Moscovici, the EU’s commissioner for economic affairs, said last month that comparing France and Italy is “tempting but wrong because the situations are totally different.”

Italy’s debt pile is higher than France’s and some analysts have told CNBC that the political commitments from both government are very different — which have been the basis for how the EU has reacted. Many also highlight that Italy’s new deficit plans were much wider that those from the previous government in Rome, further adding to the controversy.

“We believe that this democratic deficit has to be reduced … That there has to be an equal treatment of countries in similar situations,” Morawiecki added.

Morawiecki also said that the European Commission, the EU’s executive arm, should be more willing to understand Poland’s stance when it came to energy dependency and its use of fossil fuels like coal.

He said officials should recognize its history as a satellite state of the Soviet Union where it wasn’t able to develop modern energy systems. He also claimed that Poland had gone about reducing its CO2 emissions by around 35 percent compared to the obligations put forward in the Kyoto Protocol. He also claimed that Germany had more of the least carbon-efficient power stations in the EU, but evaded the criticism that Poland receives.

“(The Commission) should not discriminate and, by the way, we are going very strongly towards decarbonization but as you can imagine it takes time,” he said.

Warsaw and Brussels in dispute

Poland and the EU have been at odds in recent years following a number of policies that Warsaw implemented, which Brussels viewed as a risk to its democracy. These included changes to the country’s judiciary system.

Critics saw the changes as the government taking de facto control of much of the judiciary, accusing it of sliding toward authoritarianism. The government says the changes are to improve the efficiency of the courts after years of Communist rule.

“The conflict is now being politicized by some people in Brussels even more, because some people want to make Poland a scapegoat for their imagination, vision of how the relationship of the central institutions and member states should look like,” Morawiecki said.

He added that his government has “introduced dozens of changes” but “all after consultations” with the European Commission.

“I was always advocating for a dialogue and I was leading this dialogue with our counterparts and I can only regret that my hand which I have actually offered to my partners in Brussels has not been accepted. And even the opposite was the case. Because we have done so much to actually agree on a solution and we have actually, the recent changes we introduced in the Supreme Court we have reverted them just to show our partners in Brussels that we are ready for a wide and deep compromise, and this has been rejected,” he added.

The ruling right-wing government decided last month to reverse a decision that originally forced 27 out of 72 Supreme Court justices to retire early.