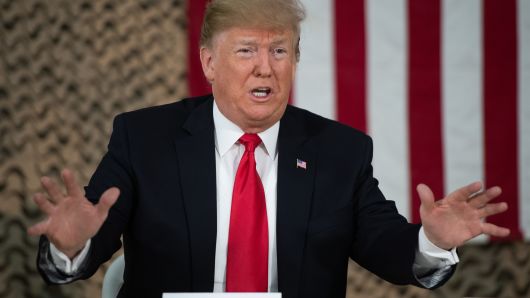 Some lawmakers will return to Washington from holiday travel Thursday when the Senate is set to convene at 4 p.m. to consider the spending bill. But Congress has so far failed to break an impasse over the president’s demand for $5 billion to build the barrier and no votes are scheduled yet.

Lawmakers will get 24 hours notice before any vote on a deal to end the shutdown, meaning a vote could not come before Friday at this point.

The White House and congressional leaders still appear far from ending the stalemate even as hundreds of thousands of federal workers face furloughs or temporarily work without pay.

After he returned to Washington from a surprise visit to U.S. military service members in Iraq and Germany, Trump quickly turned his attention back to the immigration fight. In a tweet, he questioned whether Democrats have “finally realized that we desperately need Border Security and a Wall on the Southern Border.” He suggested federal workers damaged by the shutdown support Democrats, asking: “Do the Dems realize that most of the people not getting paid are Democrats?”

t was unclear what evidence exactly Trump was using to show federal employees are Democrats. But 95 percent of campaign contributions from federal employees in the 2016 presidential election went to Trump’s Democratic opponent Hillary Clinton, according to The Hill.

The tweet, combined with remarks the president made Wednesday, indicates he has little desire to back down on his demand even as nine federal departments remain unfunded. With Democrats pledging not to put money toward a project they call immoral and ineffective, the impasse looks no closer to cracking.

The closure may drag into the new year. House Democrats have promised to pass a short-term spending bill to reopen the government, without wall money, when they take control of the chamber on Jan. 3. But Trump could threaten to veto it, jeopardizing the chances of it getting through the GOP-held Senate.

Asked Wednesday in Iraq how long he would hold out to see his demands met, Trump responded: “Whatever it takes.” He said House Minority Leader Nancy Pelosi, who will likely become speaker in January, is “calling the shots.”

Democrats appear uncertain about exactly how the president wants to spend that $5 billion. While Trump as a candidate called for a concrete barrier funded by Mexico, his demands have shifted. He has recently called for a wall, a “steel slat” barrier or a fence, “whatever [Democrats] want to call it.”

Pelosi mocked the president’s shifting descriptions in an interview with USA Today published this week.

“First of all, the fact … that he says, ‘We’re going to build a wall with cement, and Mexico’s going to pay for it’ while he’s already backed off of the cement – now he’s down to, I think, a beaded curtain or something, I’m not sure where he is,” she told the newspaper.

Senate Democrats have offered to put $1.6 billion toward constructing new or replacing existing fencing structures on the U.S.-Mexico border, but the White House wants more money. Meanwhile in the House, the party’s liberal wing will resist putting any money toward the president’s border security goals.

Trump has gone to great lengths to secure funding for the barrier, a core campaign promise that sparks chants among his supporters at political rallies. He sees it as a winning political issue. Earlier this month, he said he would be “proud to shut down the government for border security.”

About 800,000 federal workers were expected to be furloughed or work without pay during the shutdown. While Congress funded several departments such as Defense and Health and Human Services, it failed to pass spending bills for others such as Homeland Security, Justice and State.

The shutdown started Saturday as the Senate and House passed differing spending bills but failed to agree on a unified plan that could get through both chambers. House Republicans shied away from a Senate-passed measure to keep the government running through Feb. 8 after Trump threatened to veto it. It did not include border wall funding.

The House then passed a bill with more than $5 billion for the barrier. It failed to get through the Senate.