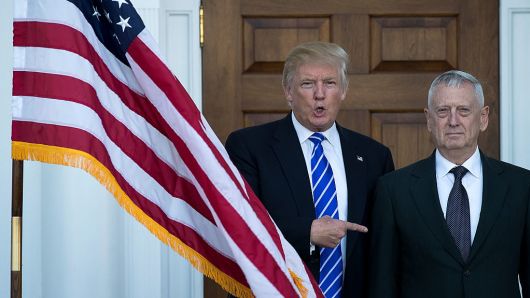 As a quarter of the federal government barrels headlong into a shutdown, the biggest story in Washington concerns America’s presence overseas, where allies fear a retreat of the global superpower that has been the bedrock of military and diplomatic alliances that have lasted since the end of the second World War.

On Sunday, Trump tapped Deputy Secretary of Defense Patrick Shanahan to become the acting Secretary of Defense, following Mattis’ shock resignation. Shanahan, a former Boeing executive who spearheaded the development of the 787 Dreamliner, took the Pentagon’s second ranking role in 2017.

Shanahan “will continue to serve as directed by the president,” said U.S. Army Lt. Colonel Joe Buccino, to CNBC on Sunday. “The Department of Defense will remain focused on the defense of the nation.”

His temporary appointment appears unlikely to allay the growing concerns about the direction of U.S. foreign policy, or the turmoil surrounding the Trump administration.

“I think you will have extreme consequences,” Sen. Ben Cardin, D-MD., told CNBC in a phone interview on Friday, speaking about Mattis’s surprise resignation the night before. The retired general’s resignation came on the heels of Trump’s surprise announcement that the U.S. would be pulling troops from Syria, and followed his decision to remove troops from Afghanistan.

That announcement came on the heels of a government shutdown, tumbling markets, and amid lingering uncertainty about the president’s legal exposure as special counsel Robert Mueller continues his probe into Russian interference in the 2016 election.

Cardin, the top Democrat who served as ranking member on the Senate’s foreign relations panel for most of Trump’s presidency, called the former Marine’s exit “one of the most difficult changes in the Trump administration.”

He added: “Not only his leaving, but the manner in which he has left will create major concerns about the reliability of America as a partner.”

Mattis issued a terse letter to the president Thursday evening, in which he hinted that the two had irreconcilable differences about their views of the world, citing their treatment of global alliances in particular. His resignation is effective at the end of February.

“As this Administration continues to implode, Secretary Mattis’ extraordinary resignation is a significant loss and a real indication that President Trump’s foreign policy agenda has failed and continues to spiral into chaos,” Sen. Bob Menendez, the Foreign Relations Committee’s ranking member, said in a statement.

Mattis was seen as the lone remaining grownup in Trump’s Cabinet, willing to push back against a commander-in-chief who disdains the government’s foreign policy apparatus, and has little use for traditional diplomacy.

“Secretary Mattis represents the last of what we might call the mainstream foreign policy thinkers in the Trump administration,” said Jim Lindsay, who recently co-authored the book The Empty Throne: America’s Abdication of Global Leadership. “His departure is going to shape the balance of advice the president gets. And I think it is also going to change how American foreign policy is viewed overseas.”

Bouts of laughter from a GOP senator

The uncertainty in Washington over Mattis’s departure was illustrated starkly on Thursday by Tennessee Republican senator Bob Corker, the departing lawmaker who heads the Senate Foreign Relations committee. Corker is the most powerful politician in Congress when it comes to oversight of America’s international relations.

Once an ally of the president, Corker soon became one of Trump’s fiercest GOP opponents, pushing back on Trump’s handling of North Korea and other matters. Last week, an incredulous Corker told reporters between bouts of laughter that he could offer no predictions about what was going to happen amid the uncertainty in the Capitol.

“Who knows? Does the person sitting beside him at the White House know?” Corker asked. “You can’t make this stuff up!”

On Friday, Corker clarified on Twitter that he would stay in D.C. for voting on Friday. He did not respond to a request for comment from CNBC.

Corker once said that Mattis was one of three people in Washington “that help separate our country from chaos.” Trump has pushed out the other two, former Secretary of State Rex Tillerson and former Chief of Staff John Kelly.

With both Corker and Mattis departing, there are few — if any — Republican voices in government who are likely to rebuff the president’s plans to reshape America’s foreign policy unilaterally.

“Secretary Mattis provided reassurance to our allies, clear-eyed leadership to our armed forces, and critically-needed advice to our President, the first president in our history without prior military or elected experience,” Sen. Chris Coons, a Delaware Democrat, told CNBC in a statement.

“This is moment for Republicans and Democrats alike to seriously reconsider the path that our nation is on in terms of national security and our president’s global leadership,” he added.

Hailed for his battlefield prowess and kinship with rank-and-file servicemembers, Mattis was affectionately referred to as “Mad Dog” and “warrior monk.” He was known for his strategy, matter-of-factness and disdain for PowerPoint, which is recognized as the U.S. military’s signature teaching tool.

And notably, the revered Marine with a military career spanning four decades, would often say that when he went into battle he was flanked by America’s allies, a principle he would not abandon under Trump’s “America First” foreign policy.

“Without questions, Mattis was seen in Brussels a a true Trans-Atlanticist in a way no one else in the administration is. His departure will make our European allies nervous,” said Michael McFaul, the former U.S. Ambassador to Russia.