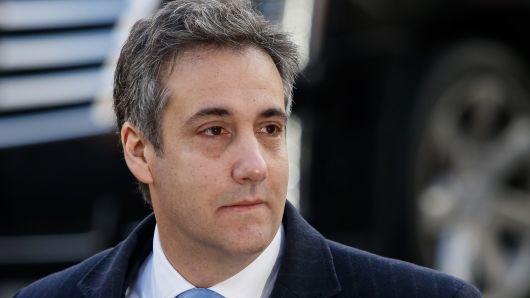 Michael Cohen, former personal lawyer and fixer for President Donald Trump, was ordered imprisoned Wednesday for three years for a range of crimes, including ones which helped cover up Trump’s “dirty deeds” and put the president in legal peril.

“I take full responsibility for each act that I pled guilty to — the personal ones to me and those involving the president of the United States of America,” an emotional Cohen said in federal court in Manhattan.

“It was my own weakness and a blind loyalty to this man that led me to choose a path of darkness over light, Cohen said.

“Time and time again I felt it was my duty to cover up his dirty deeds.”

Cohen’s own misdeeds included a range financial crimes, lying to Congress, and playing a key and illegal role in keeping two women quiet about purported affairs with Trump so that tawdry tales did not swing voters to support Democratic nominee Hillary Clinton in the 2016 presidential election.

Cohen told Pauley he lamented his past association with the president, saying he had been in “personal and mental incarceration” working for Trump.

Cohen said that while he once looked up to the Queens, New York-bred real estate developer and reality TV star, he added, “I now know there’s little to be admired” about Trump.

He also spoke contemptuously about Trump’s Twitter attacks against him, saying that the president “publicly mocks me, calling me a rat and a liar.”

Cohen said it was wrong for Trump to create “the false sense” that a U.S. president “can weigh in on” cases that affect him.

“I brought undeserved pain and shame on my family,” said Cohen, whose wife and two children were in the packed courtroom. “I deserve that. They do not.”

“I’m sorry,” he said, as he turned to look at his family before breaking down.

“I promise I will be better.”

Cohen is due to surrender to prison on March 6. Pauley agreed to recommend he do his time in the federal facility in Otisville, New York.

Although there is no parole in the federal prison system, Cohen will be eligible to be released after serving 30½ months, assuming credit for good behavior. After his release, Cohen will be on supervised release for three years.

Corey Sipkin| AFP | Getty Images
President Donald Trumps former attorney Michael Cohen arrives at US Federal Court in New York on December 12, 2018, where he is expected to be sentenced after pleading guilty to a number of charges.

The 36-month sentence was on the low end the “substantial term of imprisonment” that federal prosecutors in New York had suggested was appropriate for Cohen’s crimes. But it was more than the sentence of no time behind bars that Cohen’s lawyers had requested, citing his cooperation with authorities in recent months.

The White House has no immediate comment on Cohen’s sentence.

“Michael Cohen was sentenced today. Donald Trump is next,” said Avenatti outside of court after attending the hearing. “Michael Cohen is neither a hero nor a patriot. … He deserves every day of the 36-month sentence that he will serve.”

Trump has not been criminally charged in the case. But Cohen’s admissions to several crimes leave open the possibility that Trump could face prosecution, particularly once he leaves the White House.

Cohen’s lawyer, Guy Petrillo, in asking Pauley for leniency in the sentence, said: “Life is tough and Michael Cohen accepts that. We accept that.”

“Mr. Cohen had the misfortune to have been counsel to the president.”

Cohen pleaded guilty in August to eight charges, which included tax crimes, lying to banks and violating campaign finance laws. Those charges were filed by the U.S. Attorney’s Office for the Southern District of New York. Cohen received the 36-month sentence handed down Wednesday in that case

He pleaded guilty in November to lying to Congress about an aborted deal to build a Trump Tower in Moscow. That case was lodged by special counsel Robert Mueller, who is continuing to investigate the possibility that the Trump campaign colluded with Russians to interfere in the 2016 presidential election. Cohen was sentenced to two months in prison for that case. But that time will run concurrent with his other sentence.

Cohen admitted to lying to Congress by understating Trump’s knowledge of and involvement in the Moscow project. Cohen falsely claimed the effort to build the tower died in early 2016. But he and the Trump Organization continued pursuing the deal as late as June 2016, when Trump was on the verge of getting the Republican nomination for president and only five months before the election.

Cohen’s other crimes included campaign finance violations relating to his facilitation of two hush money payments to Daniels and Playboy model Karen McDougal shortly before the 2016 presidential election. Both women say they had sex with Trump a decade earlier.

Prosecutors said the payments were made “in coordination with and at the direction of” Trump, and that the money was paid to “influence the election.”

The White House has denied Trump had sex with either woman.

Petrillo, in asking Pauley for a light sentence, said Wednesday that Cohen offered “his relevant knowledge” to Mueller’s team, before ever pleading guilty, “knowing that he’d face a barrage of attack by the president.”

“He knew that the president might shut down the investigation,” Petrillo said.

Cohen, he said, “came forward to offer evidence against the most powerful person in our country.”

But a prosecutor from the Southern District of New York, Nicholas Roos, in contrast told the judge that Cohen “didn’t come anywhere close to assisting this office in an investigation.”

Roos said the charges against Cohen “portray a pattern of deception, of brazenness and of greed.”

Roos also said that in assisting in paying off Trump’s purported paramours to have them keep quiet before voters went to the polls on Election Day in 2016, “Mr. Cohen has eroded faith in the electoral process and compromised the rule of law.”

“We’ve treated Mr. Cohen just the way we treat every other defendant that deals with the U.S. Attorney’s office,” Roos said.

After Petrillo sought to highlight Cohen’s charitable work and attest to his client’s character as a generous friend and family man, Pauley noted that Cohen’s apparent generosity was “laudable.”

But the judge also said that Cohen had at one point “lost his moral compass.”

A significant term of incarceration, Pauley said, was “fully justifiable” as a deterrent.

Trump in an interview with Reuters on Tuesday, when asked if he had talked about campaign finance laws with Cohen, said: “Michael Cohen is a lawyer. I assume he would know what he’s doing.”

When asked about statements by prosecutors that some people who had worked for Trump either met or had business with Russians before and during the presidential campaign, Trump said, “The stuff you’re talking about is peanut stuff.”

In a statement after the sentencing, Cohen’s advisor, attorney Lanny Davis, said, “Michael Cohen, former attorney to Donald Trump, continues to tell the truth about Donald Trump’s misconduct over the years.”

“At the appropriate time, after Mr. Mueller completes his investigation and issues his final report, I look forward to assisting Michael to state publicly all he knows about Mr. Trump, and that includes any appropriate congressional committee interested in the search for truth and the difference between facts and lies. Mr. Trump’s repeated lies cannot contradict stubborn facts,” Davis said.

“Michael has owned up to his mistakes and fully cooperated with Special Counsel Mueller in his investigation over possible Trump campaign collusion with Russian meddling in the 2016 election,” Davis added.

“While Mr. Mueller gave Michael significant credit for cooperation on the core issues, it is unfortunate that [Southern District for New York] prosecutors did not do the same. To me, their judgment showed a lack of appropriate proportionality.”

“Since the sentencing process has been completed, I no longer need to serve as an attorney for Michael, but will continue to serve as a communications advisor,” Davis.