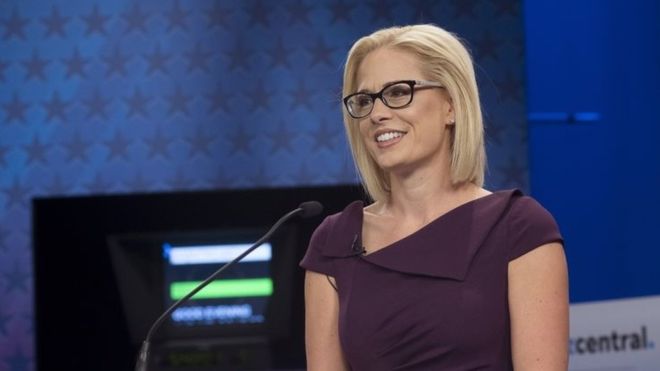 The US state of Arizona has elected its first female senator, after Democrat Kyrsten Sinema beat Republican Martha McSally in a tight race.

Ms Sinema is the south-western state’s first Democratic senator since 1994.

In Florida, a recount has been ordered by law after unofficial results fell within a 0.5% margin. Mississippi will hold a run-off vote later this month.

With almost all the votes counted, Ms Sinema had a lead of 1.7% over her rival. She takes the seat vacated by Jeff Flake, a frequent critic of Mr Trump.

She paid tribute to the memory of the late John McCain, who also represented Arizona in the Senate until his death earlier this year, saying he had set a shining example of how to put national interests above party political ones.

“Senator McCain is irreplaceable,” she said, “but his example will guide our next steps forward. He taught us to always assume the best in others, to seek compromise instead of sowing division, and to always put country ahead of party.”

In a video message posted on Twitter, she said: “I just called Kyrsten Sinema and congratulated her on becoming Arizona’s first female senator after a hard-fought battle.”